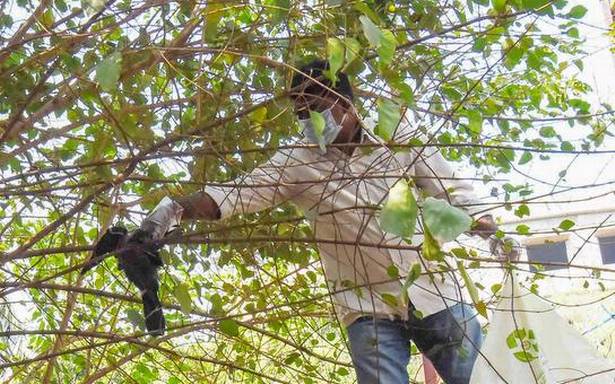 It’s not due to bird flu, says animal husbandry official

Spotting of five dead crows on the Collectorate premises here on Monday created panic as word spread that the birds died all of a sudden. The incident caused a concern in the wake of the outbreak of bird flu in some States.

The dead crows were found in a dry drain behind the main building of the Collector’s office.

The crows died in quick succession, according to sources. On getting information, Joint Director of Animal Husbandry D. Ramakrishna, Dr. S. Nagamani and a team from the department went to the spot and collected samples.

“A post-mortem examination of the crows has revealed that they were infected by pasteurella. There are no symptoms of bird flu like respiratory tract and lung infection that are usually seen in avian influenza. We have reared the culture and the bacteria will grow after 48 hours. The cause of their death will be known after that,” Dr. Ramakrishna told The Hindu on Tuesday.

“In all, five dead crows were found at the spot and two of them are suspected to have died at least two days before the others. There is no immediate cause for worry. We have formed 43 teams for surveillance all over the district. The poultry farmers have been advised to disinfect their farms to check the possible spread of the virus through wild birds in view of the detection of bird flu in some States,” he added.

When his attention was drawn to the reporting of the death of a few crows at NAD junction, DRM’s office compound and Zilla Parishad premises during the last few days, Dr. Ramakrishna said that preliminary investigations have not revealed bird flu in any of the dead crows. The tests were being done at the Animal Disease Diagnostic Laboratory (ADDL) Lab at the Government Veterinary Hospital in the city.

“We have already initiated measures in view of the COVID-19 pandemic for disinfection of the bird and animal enclosures in the Indira Gandhi Zoological Park(IGZP). A meeting was held with the staff and workers and they were educated about the bird flu symptoms and the need to keep a watch on crows and birds from the wild coming into the zoo,” said IGZP curator Nandani Salaria.

“The branches of trees close to the bird enclosures or across the top have been chopped off to prevent contact with wild birds and their droppings falling into the enclosures. The mesh is being cleaned regularly, sand changed and strict vigil being maintained,” she added.