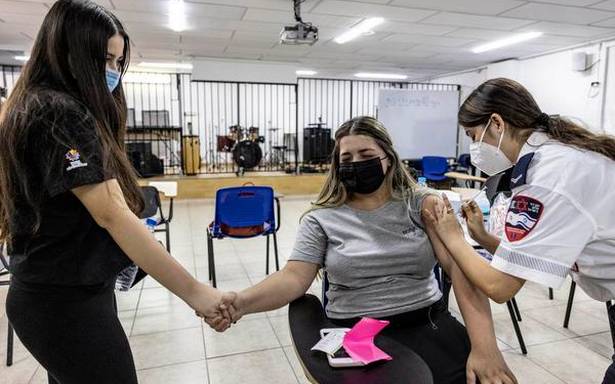 Daily COVID-19 cases in Israel started increasing from mid-June this year and peaked on September 3 despite 60% of the population being fully vaccinated. The third wave of infections in the country has been bigger than the first two. In the first week of September, Israel recorded the highest number of cases per million in the world.

The Delta variant of the virus fuelled this surge. The share of Delta-positive sequences in Israel increased from 13% in the first week of June to 87% in mid-August indicating that the surge in cases was driven by the variant.

Data show that the efficacy of the vaccine in preventing infections against the Delta variant reduced, which led Israel to administer a third dose to fully vaccinated people. However, the share of severely ill patients and fatalities due the virus was low among the fully vaccinated, indicating that the vaccine continued to protect people against critical infection and death.

Between Sept. 1 and 7, Israel recorded 833 cases daily per million people on average, the most among the 50 countries with the highest case burden. The chart shows the top five such countries.

The rise in cases came despite the fact that nearly 60% of the country had received both doses of the vaccine as on September 8. From mid-July, Israel started administering a third dose to people aged over 60 who had received their second shot at least five months before. Over time, the eligibility was relaxed and as on Sept. 8, 28.9% of the population had received the booster shot.

The booster shot was introduced because the efficacy of Pfizer-BioNTech’s vaccine (which is Israel’s main vaccine) in preventing infection reduced, particularly against the Delta variant. However, its efficacy in preventing hospitalisation and severe illness remained high. The table shows the results of efficacy studies of the vaccine over several time periods.

The efficacy of both doses of the Pfizer-BioNTech vaccine in preventing infection was 39% against the Delta variant according to the latest study. However, its efficacy in preventing severe COVID-19 was 91.4%.

Following a surge in cases, Israel saw a spike in deaths, particularly among the 60+ population, due to the virus in August. However, the majority of deaths occurred among patients who were unvaccinated while fatalities among those who were fully vaccinated remained relatively low. This points to the vaccine’s efficacy in preventing COVID-19 deaths too. The chart shows the number of new deaths recorded each month in 2021 among the 60+ population.