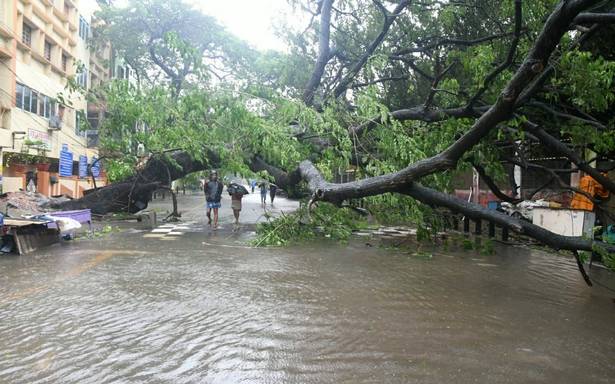 The depression that formed in the Bay of Bengal and crossed the Tamil Nadu coast on Thursday evening brought intense spells of rain in Chennai and other northern and delta districts of the State. The graphs below show how the rainfall occurred during the 24 hours from 4 p.m. on Wednesday to 4 p.m. Thursday in different regions of Chennai.

The rainfall intensified on Wednesday night around 11 p.m. and subsided since Thursday morning.

According to the data, the northern parts of Chennai seemed to have received maximum rainfall, with Ennore Port recording a total of 22.4 cm of rainfall in the 24-hour period. Between 11 p.m. on Wednesday night to 5 a.m. on Thursday morning, the rain gauge station recorded at least 2 cm rainfall every hour.

Nungambakkam recorded a total of 20.2 cm rainfall, which was marginally lower than the rainfall recorded on November 7, 2021. While Nungambakkam also witnessed intense spells on Wednesday night and early hours of Thursday, the highest rainfall of 1.2 cm in a 15-minute interval happened between 12.45 p.m. and 1 p.m. on Thursday.

Meenambakkam, in the southern part of Chennai, recorded relatively low rainfall compared to the northern and central parts of Chennai. A cumulative rainfall of 14.3 cm was recorded in the 24-hour period ending at 4 p.m. on Thursday.

11/13/2021 India Comments Off on Data: How the Chennai rainfall occurred
India