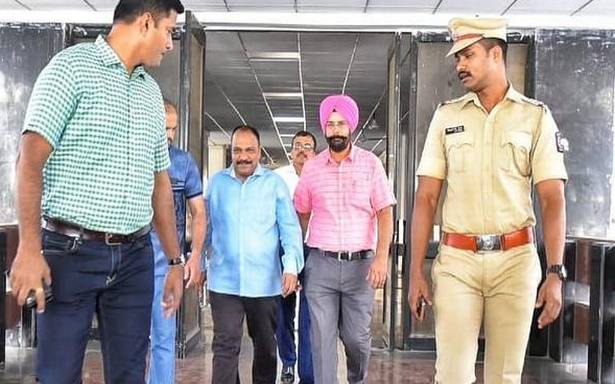 The two took part in the conspiracy and tampered with evidence, say probe agencies

A day after advocate Sanjeev Punalekar, counsel for the fringe right-wing outfit Sanatan Sanshtha, and his aide Vikram Bhave were arrested by the CBI in connection with the murder of eminent rationalist Narendra Dabholkar, a special court on Sunday directed the accused to be remanded to CBI custody till June1.

Punalekar and Bhave had been alleged by the probe agencies to have participated in the murder conspiracy, especially in tampering with evidence and in aiding and abetting Sachin Andure and Sharad Kalaskar, named by the agencies as the assailants of the rationalist.

Earlier in the day, the CBI brought the two from Navi Mumbai and produced them before the special court a little after noon amid robust police deployment.

Arguing for a 14-day custody, the CBI’s counsel submitted before the court that the agency needed time to probe the specific nature of the duo’s roles in the conspiracy and the aid given to the two sharpshooters in destroying the evidence.

After the arguments, the court remanded them to seven-day custody.

Sachin Andure’s arrest in August last was the second major one in the case.

In June 2016, the CBI had effected its first breakthrough by arresting Virendra Tawde, an ENT specialist and activist of the radical Hindu Janajagruti Samiti [a splinter of the Goa-based Sanatan Sanstha] from Panvel near Mumbai.

It had filed its first chargesheet in the case against Tawde under Sections 120 B (criminal conspiracy) and 302 (murder) among other Sections of the IPC.

After a lull of two years, Sachin Andure’s name cropped up during the Maharashtra Anti-Terrorism Squad’s (ATS’) interrogation of Sharad Kalaskar.

The ATS had arrested Kalaskar along with right-wing activist Vaibhav Raut from Nallasopara in Mumbai, and Sudhanwa Gondhalekar from Pune on August 10 for allegedly planning disruptive activities in several parts of the State.

According to the ATS, Kalaskar and Andure had confessed to being the motorcycle-borne assailants who had gunned down Dabholkar on August 20, 2013 during his morning stroll on the Omkareshwar Bridge in Pune.

The CBI had later taken custody of Kalaskar and Andure from the ATS.

In September last year, seeking an extension of Kalaskar’s custody, the CBI had further told the court that in July 2018, the accused had allegedly dismantled four country-made pistols and thrown them in the creeks of Greater Mumbai and Thane and suggested that one of the firearms could be the murder weapon used to kill Dabholkar.

In his statement to the CBI last year, Kalaskar had allegedly said Punalekar, known for his defamatory statements against Dabholkar, had asked him to destroy the weapons.

According to the CBI, Kalaskar had said it was Thane-based Bhave who had allegedly planned the reconnaissance, pointed out Dabholkar to the assailants and even planned the getaway route for the shooters after the crime.

The allegations against Punalekar and Bhave were incorporated into the CBI’s supplementary chargesheet filed against Andure and Kalaskar in February this year.