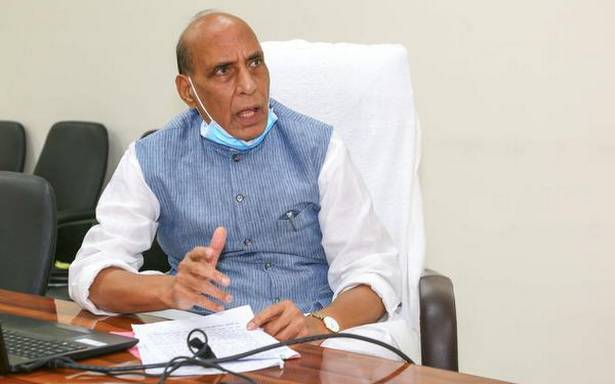 The cyclone made a landfall on Monday night near Una town in Gir Somnath, Gujarat, and wreaked havoc for around 28 hours

Defence Minister Rajnath Singh on Thursday lauded the efforts of the armed forces and the Indian Coast Guard (ICG) in conducting search and rescue operations in areas affected due to Cyclone Tauktae.

With 38 people on board a barge that sank in the Arabian Sea four days ago still missing, the Indian Navy ships worked through the night, using searchlights to trace any movement in the pitch dark waters as hopes of finding more survivors began to recede on Thursday.

The cyclone made a landfall on Monday night near Una town in Gir Somnath, Gujarat, and wreaked havoc for around 28 hours before it weakened into a depression. As many as 53 people have lost their lives in incidents related to the cyclone in different parts of Gujarat.

The Defence Ministry’s statement said, "He (Mr. Singh) commended the Indian Navy and the ICG for saving the lives of people stranded at sea, while hailing the Indian Army for deploying its columns in affected areas and the Indian Air Force for transporting personnel of the National Disaster Response Force (NDRF)." On Monday, Mr. Singh had directed the armed forces to extend all possible assistance to the civil administrations to tide over the cyclone and its effects.

The Navy on Thursday morning launched a fresh aerial search and rescue mission, deploying helicopters to scour the waters off Mumbai coast, where the accommodation barge P305 went adrift in Tauktae fury before it sank Monday.