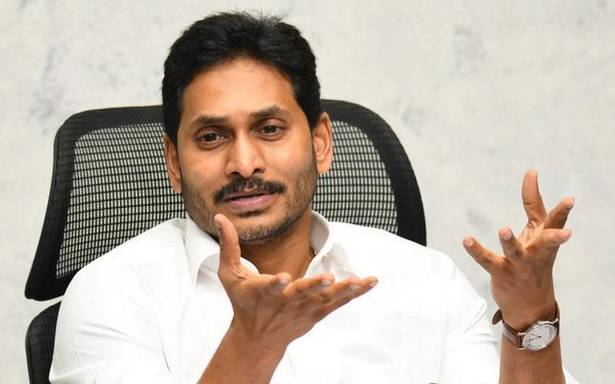 A low pressure that lay over south Thailand on December 30 and its neighbourhood emerged into the Andaman Sea later. Thereafter, it moved west-northwestwards and concentrated into a depression over southeast and adjoining east-central Bay of Bengal by December 2 and is likely to intensify into a cyclonic storm over the central parts of the Bay of Bengal on December 3.

"It is expected to cross the coasts of Andhra Pradesh and Odisha by the morning of December 4 with wind speeds ranging from 90 kmph-100 kmph, accompanied by heavy rainfall and tidal waves." "The cyclonic storm is likely to affect Srikakulam, Visakhapatnam and Vizianagaram in Andhra Pradesh and coastal districts of Odisha. It is also likely to bring heavy to very heavy rainfall in the coastal areas and Gangetic parts of West Bengal," the IMD statement said.

Here are the updates:

Chief Minister Y.S. Jagan Mohan Reddy took stock of the situation ahead of the cyclone Jawad, warned in the India Meteorological Department forecast, and ordered officials to take necessary steps to mitigate its impact.

He spoke to the Collectors of Srikakulam, Vizianagaram and Visakhapatnam districts over the phone and inquired about their preparedness.

Officials on alert with Cyclone Jawad warning for North Andhra

Vizianagaram and Srikakulam district administration have set up control rooms in their respective collectors’ offices and all coastal mandal headquarters to minimise the impact of heavy rains with the forecast of Indian Meteorological Department which has a given a cyclone warning, valid up to December.

The control rooms (Vizianagaram-08922-276888) (Srikakulam-08942-240557) will function to monitor the rains’ situation and steps to be taken to control huge damage. According to IMD’s latest bulletin, formation of low pressure associated with cyclonic circulation extending up to midtropospheric levels may turn into a depression. It is likely to intensify as a cyclonic storm and move coast of North Andhra Pradesh by Saturday, December 4th, 2021.

Maharashtra was hit by unseasonal rain on Wednesday with thunderstorms and gusty winds lashing several parts of the State, including Mumbai and Pune.

The India Meteorological Department (IMD) has forecast light to moderate rain in these areas and in northern Maharashtra and Konkan region on Thursday also.

It advised farmers, particularly those cultivating rice, to complete the harvest work and store the produce in safe places.

The Odisha Government on Wednesday directed District Collectors to ready the plan for evacuation of people by December 3 when the cyclone is likely to form over central Bay of Bengal and its path would be known.

The National Crisis Management Committee (NCMC), headed by Cabinet Secretary Rajiv Gauba, met on December 1 to review the preparedness for the impending cyclone in the Bay of Bengal region that is likely to affect Andhra Pradesh, Odisha and West Bengal.

The top bureaucrat of the country directed various Central and State agencies to "avoid any loss of life and minimise damage to property, infrastructure and crops".

"The Cabinet secretary also emphasised that state governments should make all efforts to ensure that fishermen and all vessels at sea are called back immediately and people in areas likely to be affected by the cyclonic storm are evacuated at the earliest," a statement by the Union Home Ministry said. — PTI

The Director-General of India Meteorological Department (IMD) on December 1 briefed the NCMC about the current status of the low-pressure in the Bay of Bengal, which is likely to intensify into a cyclonic storm by December 3.

The meeting was informed that the National Disaster Response Force (NDRF) has deployed 32 teams in these States with additional teams are being kept in readiness. Rescue teams of the Army and Navy along with ships and aircraft are ready for deployment if required.

Chief Secretaries and senior officers from Andhra Pradesh, Odisha, West Bengal and the Andaman and Nicobar Islands apprised the committee about "the preparatory measures being undertaken to protect the population in the expected path of the cyclonic storm as also measures being taken to ensure that there is minimal damage to infrastructure in the aftermath of the storm." Mr. Gauba "assured the State governments that all central agencies are ready and will be available for assistance".

A cyclonic storm is likely to hit the coasts of Andhra Pradesh and Odisha on Saturday morning, the India Meteorological Department (IMD) said on December 30.

It said a low pressure lay over south Thailand and its neighbourhood at 8:30 a.m. It is likely to emerge into the Andaman Sea during the next 12 hours.

“Thereafter, it is likely to move west-northwestwards and concentrate into a depression over southeast and adjoining east-central Bay of Bengal by December 2 and intensify into a cyclonic storm over the central parts of the Bay of Bengal during the subsequent 24 hours,” an IMD statement said. — PTI

(With inputs from Agencies)