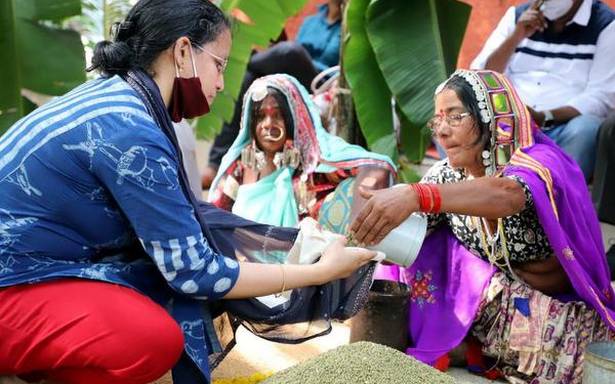 The crop yield was distributed among ‘investors’ in Pastapur village

Chandi Bai is a farmer in this tanda of Zaheerabad mandal. On Saturday, she handed over about 1kg of jowar to Tanmayi, a consumer from Hyderabad at Pastapur, the headquarters of Deccan Development Society (DDS).

Earlier in the day, many consumers visited the fields at this tanda, interacted with women farmers, enquired how the crop was grown, and how they got rid of the pests. The women explained them that they used cow dung and urine mixed with jaggery to control the pests, and in the process avoided the use of pesticides.

It was a festive mood among women farmers and consumers as it was a win-win situation for both. The produce includes millets, black gram, green gram and four varieties of jowar. The consumers took whatever they required, for which they have already paid.

The festival is termed ‘Suggi Panduga,’ an innate way of celebrating farmers’ produce which brings the farming season to an end.

About 50 consumers have invested about ₹10,000 each, and some of them even more, to each farmer, under the guidance of Beyond Organics, in association with the DDS. The cultivation was taken up on about 100 acres in Arjun Naik tanda by women farmers.

Though farmers have grown different varieties of crops, they lost hugely. “We are happy that people are ready to consume our produce by investing in our farm and we are getting it interest-free. Now, we are repaying them in the form of produce,” said Ms. Chandi Bai.

This is for the third year that the consumers are purchasing farm produce directly from farmers without middlemen. DDS is the facilitator between consumers and farmers. “See this not only as organic food, but try to understand the soul of Beyond Organics. This is a revolutionary movement,” said DDS director P.V. Satheesh.

Those who bought the produce were happy on getting completely organic food for their families.