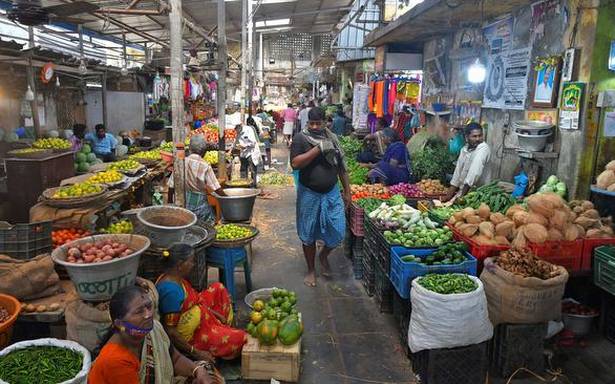 Located in the heart of the Boulevard, the Goubert Market, popularly known as ‘Periya Kadai’ is the city’s biggest vegetable market.

Established by the French, the market has stood the test of time through several decades and remained the most preferred location for meat, fish and fresh vegetables. However, the market has now become unsafe and unhygienic due to crumbling infrastructure and poor amenities such as water supply and lack of sanitation, say traders.

The market has been devoid of maintenance or improvement measures for a long time now. While the main thoroughfares around the market underwent change and development, the traders continue to function more or less out of the age-old market complex with very little amenities.

When it started, the Goubert Market, spread over 11,500 sq.m, had around 536 permanent stalls and 450 temporary stalls for vegetables, groceries, fish and flower vendors.

But now the number of vendors has doubled and they have taken over every available space in the facility, including the pathways, selling everything from books, shoes and bags. There was a plan to modernise the market in 1985 with Central assistance. But the proposal has been gathering dust, say traders.

“Though the government has promised to renovate the heritage market, it has not kept its promise so far. There are over 600 stalls in the market and all these families are dependent on the trade for survival but the market has not even been white-washed over the last several years,” S. Lakshmi, a flower seller, said.

Traders here are waiting for the promised makeover. “The market is plagued by poor sanitation and waste management systems. The market has a sanitary complex with 12 toilets each for men and women. They cater to over 4,000 odd vendors. The shopkeepers in the market are insufficient,” said A. Prabhu, a trader.

Traders said there was need for at least two more free public toilets in the complex. The market and its surrounding lanes lack parking spaces. Many customers have stopped coming to the market for the want of a parking space, Mr. Prabhu said.

The market has nine entrances on J.N. Street, Mahatma Gandhi Road, Bharathi Street and Rangapillai Street. Most of them are heavily encroached by hawkers. Motorists have a harrowing time passing through the stretch, resulting in frequent traffic snarls. The market complex too needs serious attention as its walls have developed cracks and leaks at several places, Mr. Prabhu added.

A senior official of the local administration department said improvement works had been planned in the market along with a multi-storied parking lot under the Smart City project at an estimated cost of ₹78 crore.