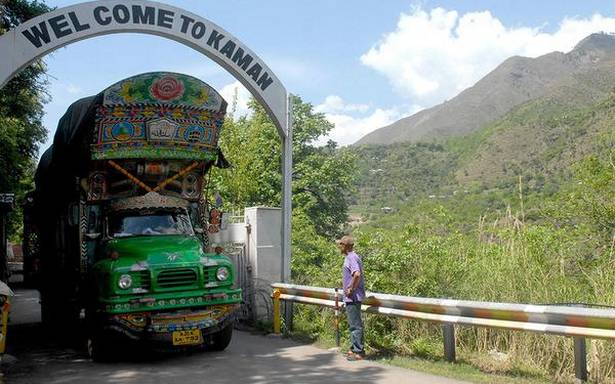 They say it helps maintain ceasefire along Indo-Pak. border

Traders associated with cross-Line of Control (LoC) trade in Jammu and Kashmir on Wednesday welcomed the move to resume trade between India and Pakistan, as it rekindled a hope that the business between the two parts of J&K, suspended since March 2019, may also come up for a discussion between the two countries.

“We welcome the step to resume trade between India and Pakistan. We demand that the government should also resume cross-LoC trade, as J&K is witnessing a rise in unemployment. Those related to the trade, including businessmen, labourers, drivers, hotels and even restaurants in Uri (a connecting point in north Kashmir’s Baramulla) are having a tough time,” S. Samiullah, vice president of the Salamabad Cross-LoC Traders Union told The Hindu.

Mr. Samiullah said the cross-LoC trade, started in 2008, from Baramulla’s Uri also brought “an end to skirmishes between the two armies along the LoC in the area”. “The movement of goods and trucks helped in ensuring that the ceasefire is maintained. It became a contributing factor in maintaining the ceasefire on the LoC. It will only help the recent pact between India and Pakistan to maintain a ceasefire in J&K,” he added.

Around 21 items of goods were approved by India and Pakistan to trade from the twin routes of Salamabad in Uri in north Kashmir’s Baramulla district and Chakandabagh in Poonch district earlier, where trade would take place four days a week. It was halted by the Ministry of Home Affairs in 2019 after it suggested the trade was “misused to fund militancy and separatism” in J&K. Around 200 traders were associated with the trade.

“We call upon the governments of Pakistan and India to restore trade on LoC as a confidence building measure. It will open a bridge for public relations and open gates of peace,” Mirza Shakeel, spokesman of the Traders of Inter-Kashmir Trade, said in a statement.