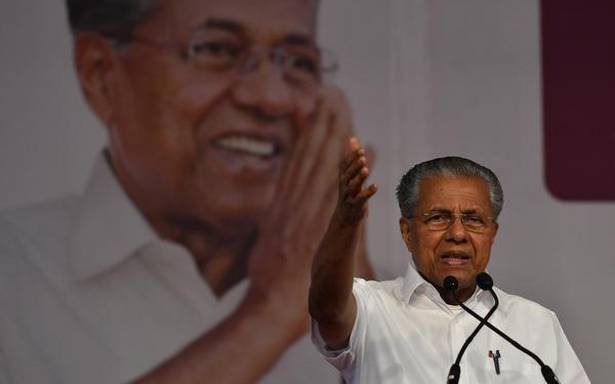 Communist Party of India (Marxist) [CPI(M)] State committee on Tuesday dropped high-profile ministers, notably Health Minister K. K. Shylaja, from the next Pinarayi Vijayan cabinet. Instead, it nominated her as the party’s whip in the next Assembly.

Ms. Shylaja’s non-inclusion in the cabinet had come as a surprise for many. She was touted as the face of Kerala’s struggle against the Nipah virus and later the COVID-19 pandemic. Ms. Shailaja had won with a decisive majority of 60,000 votes from the Mattannur constituency in Kannur. It was widely reported that the CPI(M) would make an exception in Ms. Shylaja’s case, given Kerala’s continuing struggle against the pandemic.

Ms. Shylaja told a television news channel that the party’s decision was paramount. It was a collective recommendation consistent with the CPI(M) line to rotate governmental responsibilities.

It has included two women legislators in the next cabinet. They are former Thrissur Mayor R. Bindu and Veena George. Ms. Bindu is the wife of CPI(M) acting State secretary A. Vijayaraghavan. The party has proposed M. B. Rajesh as the Speaker candidate.

Speaker-designate M. B. Rajesh later told newspersons that the party had paved the way for a new set of party leaders to gain legislative and administrative experience. The next cabinet was a mix of youth and experience. It also reflected Kerala’s social cross-section.

The CPI(M) had signalled a generational shift by withdrawing many high-profile ministers from the electoral arena. They included Finance Minister Thomas Isaac, Industries Minister E. P. Jayarajan and PWD Minister G. Sudhakaran. Mr. Vijayan had indicated that it would be his final term as Chief Minister.

A party insider said the party State committee unanimously approved the Secretariat decision. He scotched reports that some State committee members had objected to the decision to drop Ms. Shailaja.

The Communist Party of India (CPI) State executive has nominated J. Chinchu Rani, P. Prasad, K. Rajan and G. R. Anil as the party’s ministers in the next LDF government.

CPI State secretary Kanam Rajendran presided over the closed-door discussions. The CPI has also towed the CPI(M) line by proposing a new set of leaders for cabinet posts. Mr. Rajendran later reported the executive’s decision to the party’s State council.

05/18/2021 India Comments Off on CPI(M) drops K.K. Shylaja, imbues next LDF cabinet with a crop of new legislators
India