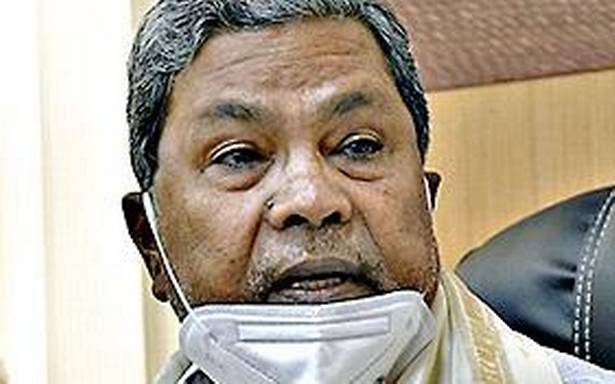 He says Karnataka lost about ₹5,500 crore of Central allocation

Launching a frontal attack on the Bharatiya Janata Party government over the alleged financial mismanagement, Leader of the Opposition Siddaramaiah on Wednesday described it as a “cowardly” government.

“The Centre is showing a stepmotherly attitude towards Karnataka and is sacrificing the State’s interests by drastically reducing its share of financial allocation and subsidy. But why is the Chief Minister not demanding the State’s rightful share?” he asked, addressing a press conference.

He alleged that Karnataka had lost about ₹5,500 crore of Central allocation. Pointing out that the State’s entire expenses towards handling the COVID-19 pandemic were ₹5,300 crore, he said this would mean that the State had lost its money which was bigger than what it spent on COVID-19 management.

Pointing out that the government often refers to additional expenses owing to the pandemic to argue that it was not possible to provide additional grants to other projects or take up new projects, he argued that it was possible to prevent such a situation if the government had shown courage to demand its rightful share of allocation from the Centre. “Karnataka gives a total Central tax of about ₹2.5 lakh crore. But in return, it is getting a meagre ₹34,198 crore,” he said.

He said the actual revenue deficit in the State was expected to touch ₹20,000 crore for 2020–21 as against the claims of having ₹143 crore surplus in the State Budget. Similarly, the revenue deficit for 2021–22 was also likely to touch ₹20,000 crore though it was projected to be ₹15,133 crore, he said. According to the prediction by the State government, the deficit was likely to touch ₹57,933 crore by 2024–25, he said, and wondered if it was not an indication of the State moving towards financial bankruptcy.

He alleged that Chief Minister B.S. Yediyurappa did not have any plan to tackle such a huge revenue deficit, let alone reducing the committed expenditure.

03/24/2021 India Comments Off on ‘Cowardly’ govt. not seeking its rightful share from Centre: Siddaramaiah
TV & Movies