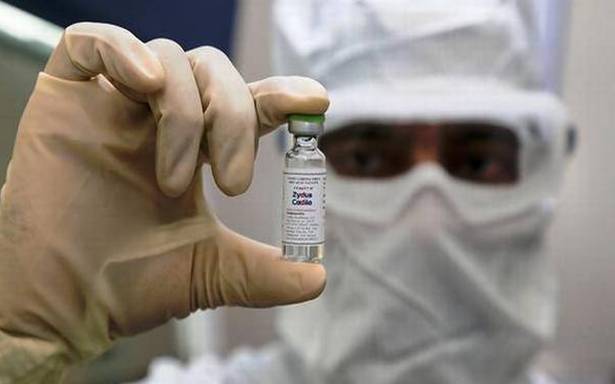 Around 12 crore still due for second dose of vaccine, says Union Health Ministry

Zydus Cadila’s COVID-19 vaccine ZyCoV-D will be initially introduced in seven States including Bihar, Jharkhand, Maharashtra, Punjab, Tamil Nadu, Uttar Pradesh and West Bengal, said Union Health Secretary Rajesh Bhushan said on Thursday. These States have been asked to identify the districts with high number of the first dose left out, for introduction of the vaccine.

After a review meeting with the States, Mr. Bhushan said around 12 crore people are still due for their second COVID-19 vaccine dose across the country. The States have been instructed to ensure that all eligible beneficiaries of the first dose are saturated and available vaccines consumed timely and no dose expires in both the government and private facilities.

“The ‘Har Ghar Dastak’ nation-wide COVID-19 vaccination campaign has resulted in a hike of 5.9% in the first dose coverage [till Nov 30] and a jump of 11.7% in the second dose coverage has been registered during the campaign,’’ said Mr. Bhushan.

The Ministry said in a release that a national training for ZyCoV-D had been completed. Also, the selected States have been asked to plan sessions based on pharmajet-injector and identify vaccinators for training.

At the meeting, the Health Secretary urged the States to optimally utilise local influencers and community leaders to enhance the awareness among communities to come forward for the doses, especially the ones who are overdue for the second dose.

The cumulative number of vaccine doses administered in the country crossed 125 crore on Thursday. Out of this, 79.13 crore (84.3%) people have been vaccinated for the first dose and 45.82 crore (49%) received the second dose as per the provisional report.

The States have also been advised to devise targeted plans in context of doses given in August and September last to ensure coverage of all beneficiaries due for the second dose by exponentially increasing the vaccination pace.