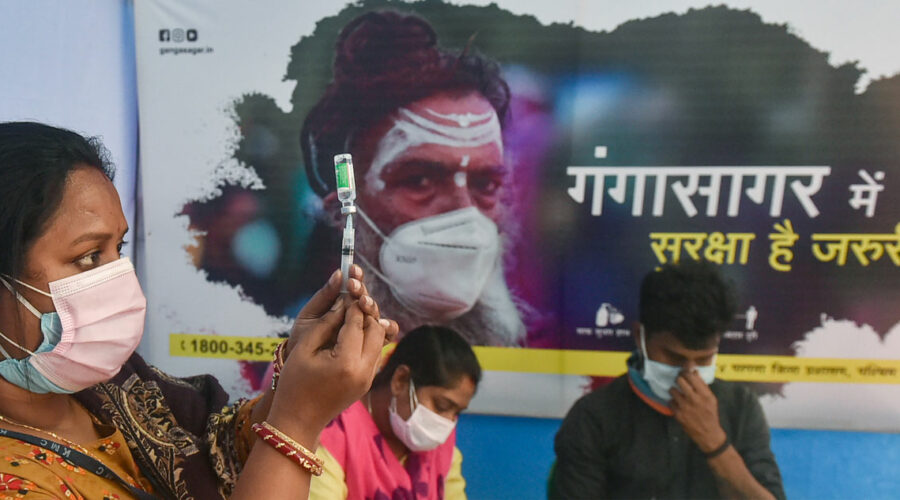 If the pandemic persists, at least a portion of the blame should go to greed and nationalism that got in the way of the world acting together, notes Prosenjit Datta.

As the New Year begins with one more wave of COVID-19, the question uppermost in everyone’s mind is: When will it end? World Health Organisation Director-General Tedros Adhanom Ghebreyesus on December 31 said he was optimistic it would end in 2022.

Those are brave words, but it seems unlikely. The world, and particularly India, needs to be cautious and prepared for the worst.

Though much of the current media limelight is on the Omicron variant, there is worrying news of variants that combine the worst of Omicron and Delta, or Coronavirus and Influenza.

The problem is that there is no reliable information available with anyone, which makes battling the pandemic difficult.

Healthcare authorities and regulators worldwide — from WHO to the US CDC — have still to come to grips with the nature of the beast.

If the pandemic persists, at least a portion of the blame should go to greed and nationalism that got in the way of the world acting together.

Global leaders, despite the prodding by WHO, failed to evolve a common strategy.

The first generation of Covid vaccines also proved to be imperfect weapons.

Squabbles over patents and permissions have plagued the fight against the pandemic for the entire 2021.

Big Western pharma refused to share IP which could have helped speed up the global vaccination drive.

They are currently even squabbling with university researchers in their countries over who actually own the various patents.

Meanwhile, national regulators — from the US to the UK to India — have preferred giving emergency approvals to specific vaccines linked to domestic efforts rather than agree on a common set of vaccines that will be used globally.

Western nations stockpiled vaccines in excess of their requirements, resulting in slow/no availability of vaccines in the poorest nations.

The first generation of vaccines, as is clear in hindsight, has only afforded partial protection.

Worse, not only do they have limited efficacy against new variants, the time till which protection lasts is also not clear.

Booster doses, if and when taken, also may not offer protection beyond three to six months.

The hopes of doctors and even laypeople are now riding on three things.

The first is the development of the first lot of antiviral drugs that have demonstrated efficacy in treating the disease.

The second is the hope that the second generation of vaccines currently under development will be far superior in dealing with multiple variants than the first generation.

And finally, the third is the fatalistic thinking that eventually the vast majority of the people will develop immunity from the disease because of a combination of a mild infection and administration of two doses of the first generation of the vaccine and, maybe a booster/protective third dose.

The new antiviral drugs that have been just approved in different parts of the world — Molnupiravir by Merck and Paxlovid from Pfizer — have rekindled a lot of hope.

They are new weapons in the arsenal of frontline doctors.

But it might be good to temper the enthusiasm. Molnupiravir — which has been approved in India as well — has shown to be effective only in about a third of the cases.

Paxlovid, currently approved in the US and the UK and a few other countries, has greater efficacy — a claimed 90 per cent — but that is from trials on a limited number of patients.

How effective it will prove in real world conditions across countries is not known.

Availability will remain an issue for some time too.

But other drug makers are in the race as well. Over the next six to eight months, more drugs and hopefully highly effective ones will become available.

Meanwhile, the second generation of Covid vaccines that are possibly better than those of the first generation are also likely to start becoming available.

Akston Biosciences candidate AKS 452 has generated a fair amount of attention in India as well because reports suggest it has been approved by the regulator, the Central Drugs Standard Control Organisation, for an open label bridging study in India.

But it is not the only one on the anvil.

There are at least two dozen others in various phases of development and clinical trials, and one can expect at least half of them to be in production in the next six months.

The third scenario does not need to be discussed because it is more hope than backed by scientific thought.

The antiviral drugs and the second generation of vaccines are possibly the best weapons that will be available, but to ensure that they are actually used effectively, global leaders should avoid the mistakes they made with the first generation of vaccines — refusing to share data or IP, stockpiling doses beyond what they required, and finally approving vaccines at least partially based on nationalistic sentiments than hard scientific data, and even failing to evolve a common set of standards for treatment.

The question really is: Will they be able to learn from their mistakes and understand that no one is going to be safe until everyone is?

Prosenjit Datta is former editor of Business Today, Businessworld, and founder of Prosaicview, an editorial consultancy.