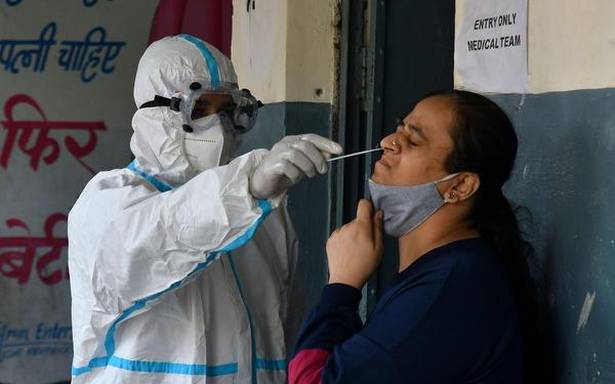 Over 58 lakh people in the national capital live in ‘high-risk’ areas: govt. data

Following Home Minister Amit Shah’s meeting on Sunday with Delhi Chief Minister Arvind Kejriwal, the Delhi government has received ventilators and bilevel positive airway pressure (BiPAP) machines from the Centre. Besides, the ICMR has decided to increase the number of samples from Delhi that can be sent for RT-PCR tests in the ICMR labs, by nearly 8,000 a day, officials told The Hindu.

Moreover, about 58.1 lakh people live in high-risk areas of COVID-19, including containment zones and busy markets. The highest congregation of such people are in the south-west district and lowest in the north-east district, as per Delhi government data.

About 57-58 lakh people will be covered in a door-to-door survey, starting Friday, to find people who have developed symptoms of COVID-19, according to officials. Though the 11 districts raised a demand of 11,400 teams to conduct the exercise in four to five days, the government has decided to go ahead with 9,500.

A BiPAP machine aids in breathing by helping to push air into the lungs. About 90% of ICU beds with ventilators in Delhi were occupied by Tuesday night.

“Earlier, labs under ICMR were taking about 2,000 samples from Delhi for RT-PCR testing. It has been increased to nearly 10,000,” a health department official said.

After Sunday’s meeting, the MHA had said that it had decided to hold house-to-house survey. But in a meeting on Monday, it was decided that the survey will be conducted in high-risk areas. Symptomatic people will be tested and isolated so that they don’t spread it.

Similarly, the South-West district has 740 containment zones, which is the highest among the 11 districts and the North-East has the lowest with 140.