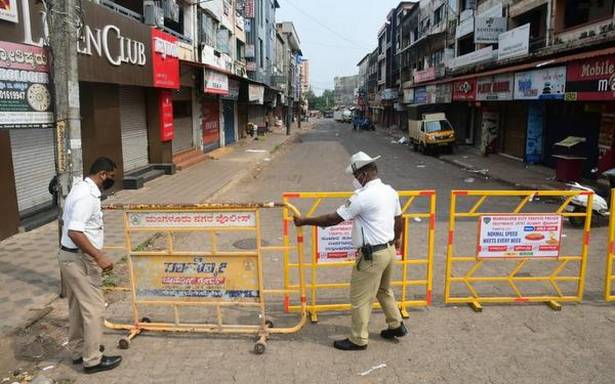 DG &IGP Praveen Sood clarifies that police are not issuing any passes during the lockdown and asked people not to believe messages being circulated on social media.

On the first day of the 14-day lockdown, people were allowed to come out of their houses to purchase essential commodities from 6 a.m to 10 a.m. Thereafter, police were seen forcibly closing shops and markets, and barricading roads to discourage non-essential movement of people.

Closure of shops and markets riked shop owners who could not sell perishable items such as vegetables, flowers and others. Vendors were seen arguing with police about the 10 a.m deadline.

At the historical K. R. Market, police forcibly closed shops after 10 a.m. G.M. Divakar, president of K.R. Market Flower Merchants’ Association, told The Hindu that just around 10% of the flowers that usually come to the market were brought in by farmers. “There is still some confusion among farmers, Wednesday being the first day. We hope business picks up eventually though,” he said and added that there were around 1,000 daily wage workers who lived in the market.

“The government or Bruhat Bengaluru Mahanagara Palike (BBMP) should ensure that these workers are provided meals during the lockdown period at least. The association had, over the last weekend, distributed meals to all these labourers,” he added.

He, however, sought to know measures taken by the BBMP to regulate and manage the crowds at K.R. Market. With a huge number of people usually gathering at the historical market, he alleged that the civic body had not taken any measures to manage the situation. Refuting these allegations, Mr. Divakar said the civic officials were in the market overseeing arrangements, besides ensuring there is no overcrowding.

On any normal day, the market on Hutchins Road, Fraser Town is abuzz with activity – vegetable cart sellers jostling for space with pedestrians; people sipping tea or coffee outside the local newspaper store and long queues outside the local butcher. For the past three days, however, business has been dull. “Even today, the first day of the lockdown, I had very few customers, so I will close early. But I think more locals will come and buy fresh produce in the coming days when they run out of stock. We had huge orders on staples such as rice, dal and flour yesterday before the lockdown kicked in,” said a local store owner.

Most citizens either decided to stick to online shopping or went early to stock up on essentials. Mahadev, a resident of Jayamahal, said he was uncomfortable ordering vegetables online and chose to make a quick visit to his neighbourhood vendors to buy what was needed. “I went early as even I am scared to step out now. I have only got one dose of the vaccine,” he added.

Those who were banking on online portals to deliver essentials complained of long waits, sometimes extending up to two to three days.

Some citizens also said that in inner residential areas, movement of personal vehicles continued unhindered despite the lockdown kicking in.

In the afternoon, major roads bore a deserted look. Police were checking each personal- and other vehicles moving on roads such as Mysuru Road and Tumakuru Road.

Passengers wait at railway stations for more than 12 hours

Hundreds of migrant workers, students and others were seen waiting for trains at Yesvantpur and KSR-Bengaluru city railway stations. A majority of them have been waiting since Tuesday evening. Non availability of public transport after 9 p.m on Tuesday forced them to reach the stations almost a day in advance. The officials of the SWR said that passengers are waiting for more than 12 hours at the stations.

Divisional Railway Manager (Bengaluru Division) Ashok Kumar Verma said, “As per the State government guidelines, public transport is not allowed. People who had booked tickets to travel to various destinations in Bihar, West Bengal and other areas in north eastern parts of the country had reached on Tuesday evening itself. They are waiting in the parking lot and other corridors.” The SWR is operating a special train to Patna in the afternoon.

People reaching the airport also had a tough time as cabs were not easily available. “I was trying to book a cab online to reach the airport. I reached out to both Ola and Uber on social media but no response was received,” Sudarshan, an air passenger said.

The BMTC operates only six ‘Vayu Vajra’ services from Majestic to the Airport. The KSRTC is operating FlyBus from Mysuru and Madikeri to the Airport.

DG &IGP Praveen Sood has clarified that police are not issuing any passes during the lockdown and asked people not to believe messages being circulated on social media on police issuing passes. He further said that police personnel checking vehicles on road will take a call allowing vehicles based on case by case basis.