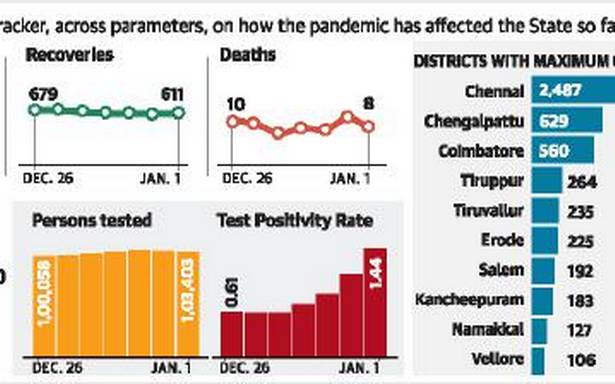 60% of the fresh cases reported in Chennai, Chengalpattu and Tiruvallur districts

The number of people testing positive for COVID-19 rose to 1,489 in Tamil Nadu on Saturday. At least 60% of the fresh cases was reported in Chennai and its neighbouring districts of Chengalpattu and Tiruvallur.

Another person, who was not linked to international travellers, tested positive for the Omicron variant of SARS-CoV-2, taking the total number of confirmed cases to 121.

From 1.1% on Friday, the State’s overall positivity rate rose to 1.4% on Saturday.

With daily infections continuing to rise, Chennai topped the table with 682 cases, accounting for 45% of the fresh cases reported in the State. The city had recorded 589 cases on the previous day. The surge in cases continued in Chengalpattu too, as it recorded 168 cases, while Tiruvallur reported 70 cases.

There were 75 cases in Coimbatore and 44 in Tiruppur. Vellore recorded a small rise in cases as 39 people tested positive for the infection. Thoothukudi recorded 36 cases, while Erode and Kancheepuram logged 35 cases each.

While Mayiladuthurai saw no fresh case of COVID-19, there were fewer than 10 cases each in 16 districts. A total of 19 travellers from abroad and other States tested positive for COVID-19 in the State. They included four travellers from the UAE and six from Bangladesh. The fresh cases took the State’s tally to 27,49,534.

Another eight persons succumbed to the infection, taking the toll to 36,784. Vellore reported two deaths, while Chennai, Coimbatore, Krishnagiri, Tiruvallur, Tiruvarur and Tiruppur recorded one death each.

The number of patients under treatment for COVID-19 rose to 8,340.

Chennai had the highest number of active cases, at 2,920. Another 611 people were discharged after treatment, taking the total number of recoveries so far to 27,04,410.

According to the Health Department’s bulletin, out of the two samples sent for whole genomic sequencing that were pending validation, one was identified as the Omicron variant and the other as the Delta variant.

Of the 121 cases of the Omicron variant, 91, including 70 in Chennai, were discharged. Out of the 27 persons in hospital presently, Chennai had the most number of active cases, at 22. Three cases were cross-notified to Kerala, Puducherry and Andhra Pradesh.