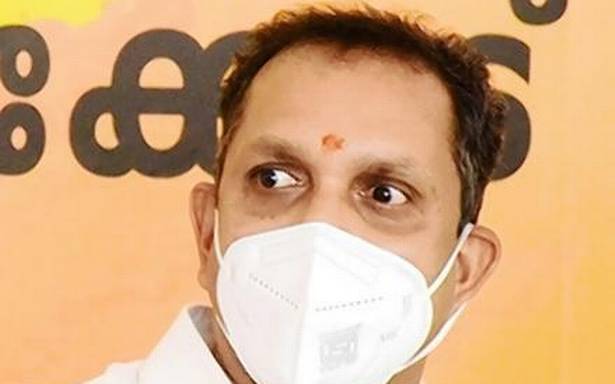 Allegations of bribery during elections in Manjeswaram Assembly segment where K. Surendran was a candidate

The Kasaragod Judicial First-Class court will consider on Monday a petition filed by the police seeking permission to register a case against Bharatiya Janata Party (BJP) Kerala State unit president K. Surendran in connection with allegations of bribery during the recent elections to the Kerala Assembly.

V.V. Ramesan, the Left Democratic Front candidate in the Manjeswaram Assembly constituency where Mr. Surendran was the BJP candidate, had filed a complaint to the Kasaragod District Police Chief (DCP) seeking to register a case against Mr. Surendran for allegedly bribing another candidate in the segment and exerting pressure on him to withdraw his nomination. The DCP handed over the complaint to the Badiyaduka police. Mr. Ramesan will appear before the court to testify.

Mr. Ramesan had filed the complaint based on the revelation by K. Sundara who said that he was paid ₹2.5 lakh and a phone to withdraw his nomination for the Manjeswaram segment.

The Badiyadukka police have recorded Mr. Sundara’s statement. He told the police that BJP workers had threatened him demanding to withdraw his nomination for the 2021 Assembly elections. He said that Sunil Naik, Suresh Naik and Ashok Shetty were among the group who gave him money for withdrawing his nomination.

Sunil Naik was questioned in connection with the Kodakara money heist case.

Based on the new statement, the police are also considering inclusion of provisions that will enable them to register a case without the court’s permission. The local police will report the preliminary findings to the Range Inspector General and his permission would be sought for further proceedings.

Mr. Sundara who contested as an Independent candidate in the 2016 Assembly elections too had gathered over 400 votes then. Mr. Surendran was defeated in the segment in 2016 with a margin of 89 votes.