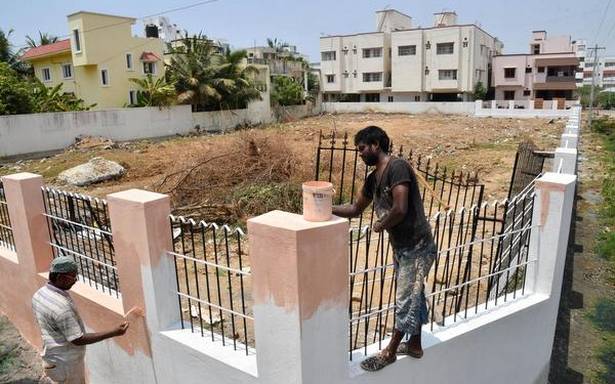 Greater Chennai Corporation has fenced three open-space reservation (OSR) lands at Kamakoti Nagar in Pallikaranai. Residents say there are six OSR lands at Kamakoti Nagar of which two have been developed into a park and a basketball court, at First Main Road and Second Main Road respectively. Of the remaining four OSR lands, three will be developed into playgrounds and one has been dedicated for the establishment of a sewage pumping station. Sashi Menon, a former office-bearer of Kamakoti Nagar Residents Welfare Association, says, “Earlier, at the OSR land at Sixth Cross Street, taxis and buses of educational institutions and travel agencies can be found parked. In February, the Corporation put an end to this practice by constructing a compound wall around the OSR land. We request the Corporation to dedicate one of the three facilities exclusively for women by creating a fitness centre.”

Also, residents have requested that the construction of a sewage pumping station at Seventh Cross Street be resumed.

“Chennai Metropolitan Water Supply & Sewerage Board began the construction of a sewage pumping station in 2011 and it was scheduled to be completed by 2013. The work progressed at a slow pace and it came to a standstill after the floods in 2015. In addition to paying sewerage tax to CMWSSB, we still continue to spend towards clearance of septic tanks,” says Sashi Menon.