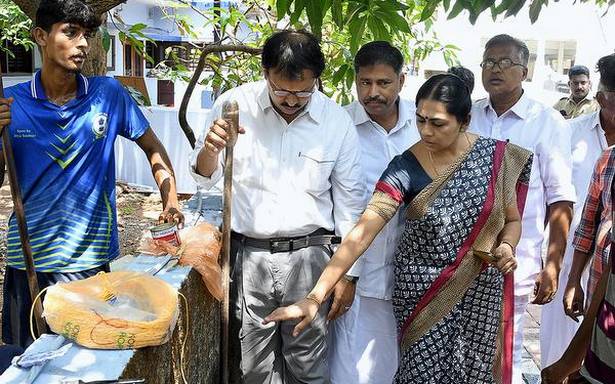 Encroachers have built structures on nearly four acres along waterbody

Mayor Soumini Jain on Tuesday led the Kochi Corporation’s drive to restore encroached land on the banks of Chilavannoor lake. The area to be freed from illegal construction runs along 4.5 kilometres along the lake’s boundaries, from Elamkulam to Thykoodam bridge, and is lying in 79 plots.

The area had been surveyed by the Corporation over a year ago on the basis of a High Court order following coastal regulation zone violations, said a senior official supervising the survey stone-laying process.

Nearly four acres are encroached upon where people have built boat jetties, gardens, compound walls and erected temporary structures knowing very well that the land is illegally owned, said the Corporation official. Allegations on Elamkulam Kochi metro station built on encroached land came up because of vested interests, he added.

The drive to take over encroached land would continue for a couple of days, the official added.

Encroachers had approached the Corporation to give them time to vacate land . However, the official maintained that since it is encroached land, there is no need to notify them. Besides, the survey was done over a year ago. There was enough time for them to vacate the encroached land.

After laying the survey stones, all structures falling within the encroachment line would be demolished.

The Corporation had been dragging its feet on taking action against the encroachments along the Chilavannoor Lake. However, in the wake of the Supreme Court order to demolish five apartments that violated CRZ norms, the issue had also came to the limelight again.

05/29/2019 India Comments Off on Corpn. marks encroachments on banks of Chilavannoor lake
India