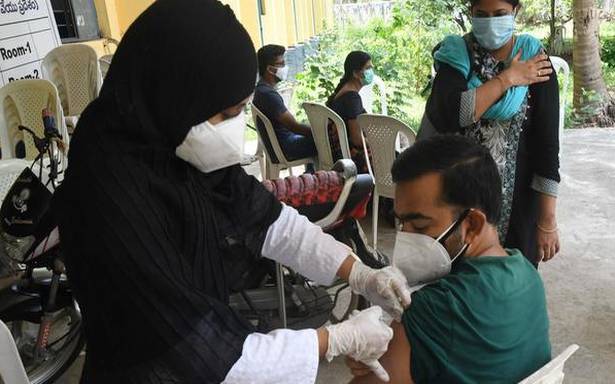 The Centre has capped the prices at which vaccines will be sold at private hospitals. With a ceiling of ₹150 that hospitals can charge per dose as ‘service charge’ and a GST of 5%, the maximum price chargeable for Covishield is ₹780, for Covaxin, ₹1,410 and for Sputnik V ₹1,145, the Union Health Ministry said in an order on Tuesday.

The State governments would be entrusted with ensuring that these price barriers were not breached and if, in future, vaccine prices fell, it would influence the maximum cap.

Two COVID-19 patients, who were given ‘Monoclonal Antibody Therapy’, tested negative eight days after developing symptoms, Max Healthcare said in a statement on Tuesday. The hospital termed it as the “fastest ever recovery” in patients.

“We conducted RT-PCR test on two people who tested positive, eight days after developing symptoms and it turned out to be a definite negative. They were administered Antibody Cocktail Therapy within three days of testing positive. This is the fastest ever recovery reported in patients, particularly senior citizens suffering from comorbidities,” the hospital said.

From a peak of over 7,500 cases a day in mid-May, the number of COVID-19 cases reported daily in Chennai has consistently and sharply declined to less than 2,000 now.

In the past two weeks, the average number of cases reported daily declined by 34% in the city. However, the decline was not uniform across all the zones. While a majority of them reported a sharp decline, Tondiarpet, Royapuram and Thiru Vi Ka Nagar saw only a marginal drop. As against the 34% decline in cases reported in the city, the cases in these three zones dropped by only 8%, 10% and 16%, respectively. In absolute figures, while the average number of cases reported daily in these three zones together was 485 during May 25 to 31, it dropped to 429 during June 1 to 7.

In contrast, in the Anna Nagar zone, the average number of cases reported daily reduced by nearly 50% to 168 last week from 309 the earlier week.