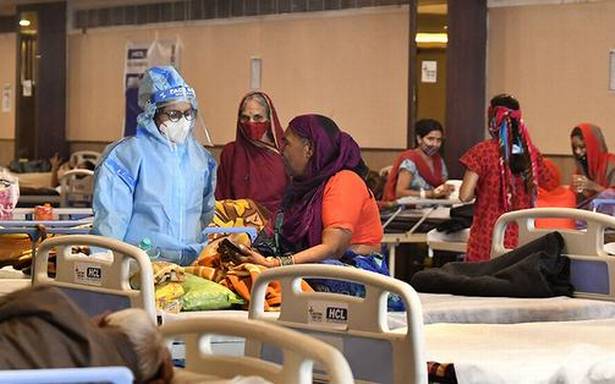 The UK variant of the coronavirus, marked by increased infectivity, is distinctly more prevalent in several northern and central Indian States when compared to the southern ones, a perusal of genome sequencing data from the National Centre for Disease Control (NCDC) shows. Two scientists from Central government labs that analyse national genome sample data told The Hindu that large gatherings in Punjab have significantly amplified transmission of the variant in Delhi, Uttar Pradesh, Haryana.

“Punjab has a very unique trajectory in the rise of the B.1.1.7. There were at least four major clusters (super spreader events) marriages, farmer protests from February 1 to February 28 , that are responsible for large spikes. By March, Delhi was warned about a possible 15,000 critical cases,” Dr. Sujeet Singh, Director, NCDC told The Hindu.

The NCDC is the coordinator of genome sequencing data from the Indian Sars Cov2 Genome Consortium (INSACOG) — a group of 10 labs across India that is collecting a fraction of coronavirus positive samples from international travellers, their contacts as well from the local communities to check for patterns in mutations — especially known variants of concern (VoC) such as the UK variant, the South African variant (B.1.1.35) and the Brazil variant (P.1).

Though only a fraction — about 15,000 samples — of India’s caseload has been sequenced, data from 1,757 samples showed that in the northern States the proportion of the UK variant in the community was significantly higher than those isolated from international travellers and their contacts. The UK variant, according to the data available with The Hindu, comprises 1,666 of the 1,757 samples.

In Punjab, for instance, there were eight instances of the UK strain among international travellers and their contacts but 543 in the wider community; in Delhi this ratio was 91: 324. In Himachal Pradesh and Jammu and Kashmir, there were no reported variants in those with an international travel history but 26 and 23 cases respectively in wider community. In Haryana the ratio is 6:13. In Madhya Pradesh, the ratio was 4:51 and in Chattisgarh 1:14.

However, such a pattern doesn’t hold, in fact is directly reversed, in Maharashtra, Kerala and Tamil Nadu — other States with large case loads. There were more instances of the UK variant in the travellers and their contacts than in the wider community. In Maharashtra the ratio was 35: 29; in Kerala its 15:1 and in Tamil Nadu 14:1, in many instances diametrically opposite to the northern situation.

“What is unambiguous is that the UK variant was imported into Delhi and Punjab and that’s not surprising because of the presence of the international airport and there were significant amplifying events in Punjab that also spread to Delhi,” said Dr Anurag Agrawal, Director, CSIR-IGIB, “It could have been mahapanchayats, the farmer gatherings in Delhi, weddings. The only way to establish this is to check with donors of all these samples if they were present at protests.”

The UK variant — by the far the most dominant Variant of Concern — is competing against the Indian strain (B.1.617), he said and is fairly established in North India. In the UK too, when it was first identified, it was characterised by an increased instances of breathlessness and demand for oxygenation. However the ongoing catastrophe is Delhi is less attributable to the variants per se and more to the number of affected people and the low per capita availability of beds, Dr. Agrawal added.

The INSACOG initiative was formally launched only in December and has sampled less than 1% of its target genomes as opposed to 5%. There is wide disparity in the number and quality of samples that are provided by States to the labs for analysis. For instance, Uttar Pradesh, India’s largest State has 17 instances of the UK variant according to the data Dr. Singh showed and no samples among the wider community. Dr. Agrawal, however, confirmed that more samples analysed (data which is unpublished) from U.P. showed rising numbers of the UK variant.

While India grapples with an unprecedented rise in infections, experts have said that the entry of newer more infectious variants coupled with normalisation of public life and massive gatherings — religious and political — have given second wind to the pandemic that has caught India unprepared. In March it was reported that 81% of coronavirus positive samples comprised the UK variant and the hospital infrastructure of the state like Delhi, Haryana and Punjab is overwhelmed.