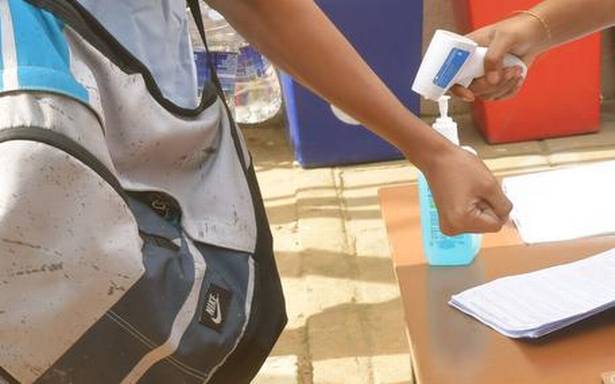 The Tamil Nadu government on Tuesday allowed physical classes for students of Class I-VIII from November 1. The standard operating procedure issued in this regard must be strictly followed, it said.

In a statement, Chief Minister M.K. Stalin said the decision was based on the inputs from medical experts, educationalists and parents. Students of Classes IX to XII have already been attending physical classes.

These experts had contended that students of Class I-VIII were under immense stress, experienced a gap in learning and suffered loss as they did not attend physical classes and remained home for several months because of the COVID-19 restrictions, Mr. Stalin pointed out.

The School Education Department would undertake preliminary arrangements for the resumption of physical classes, he said.

Mr. Stalin said the lockdown would be in place in the State till 6 a.m. on October 31. “The restriction on social, political and cultural events, festivals and consecrations, among others, would continue.”

Religious places and places of worship would remain closed on Fridays, Saturdays and Sundays, Mr. Stalin said. All relaxations and restrictions already announced would continue.

The government allowed the weekly grievance day meeting to be held in the office of the Collector every Monday. This was in view of the huge crowd gathering at the Secretariat to submit petitions, he said.

The Chief Minister also appealed to members of the public to exercise caution ahead of the festival season and avoid crowded places. “Only with appropriate restrictions could the third wave [of COVID-19] be avoided,” he said.

On Tuesday, Mr. Stalin chaired a meeting of Ministers and officials to review the COVID-19 situation.