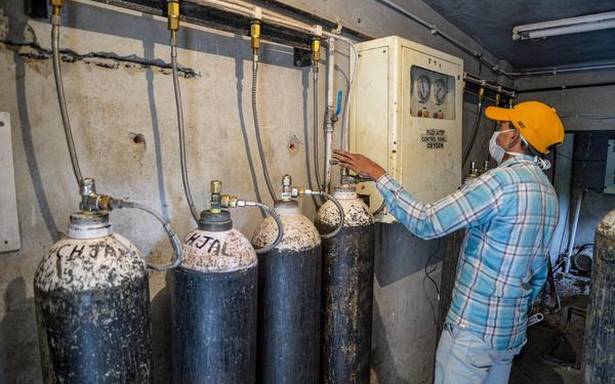 In a letter to the distirct Chief Medical Officer, Chauhan Hospital and Eye Care sought permission to shut down its COVID centre, accusing Tehsildar Preeti Jain of confiscating 15 filled cylinders of its stock of 30

A private hospital in Uttar Pradesh’s Agra district on Monday sought permission of the administration to shut its COVID-19 facility accusing an official of obstructing supply of oxygen to the centre. The tehsildar concerned denied the allegations and said the hospital owner was trying to pressure her to fill his cylinders from a plant that had temporarily run dry.

In a letter to the distirct Chief Medical Officer, Chauhan Hospital and Eye Care sought permission to shut down its COVID centre, accusing Tehsildar Preeti Jain of confiscating 15 filled cylinders of its stock of 30.

“She disrupts the oxygen supply of the hospital every day,” the hospital alleged, stating that it was “fed up” with the “mental harassment.”

Bhupendra Chauhan, owner of the hospital, said a vehicle sent by him had gone to an oxygen plant to refill cylinders that had run out of gas the night before. However, he alleged the tehsildar snatched the cylinders and despatched them for storing at a local school and also misbehaved with his staff and him.

The hospital has 12 patients.

“After media pressure, she later returned five filled cylinders and 10 empty ones. She had accused me of black marketing,” Mr. Chauhan told The Hindu.

Mr. Chauhan said the disruption had left his hospital with oxygen backup of only 6 hours while the government had asked hospitals to maintain a backup of 36 hours.

Ms. Jain, however, termed Mr. Chauhan’s allegations false. She said Mr. Chauhan was making up “lies” to “pressure” the administration to get his cylinders refilled even though the plant had run dry at 4 a.m.

“Even then he did not take his empty cylinders and left them at the plant. He is blackmailing me. I was on duty and told him it would not be possible to refill his cylinders as there was no oxygen at the plant,” Ms. Jain said.

She said there was no shortage of oxygen but maintained that oxygen was being distributed as per need and equitably.

Meanwhile, Uttar Pradesh officially recorded 249 deaths and 33,574 fresh cases over the past 24 hours, including 69 deaths in Kanpur, Varanasi and Lucknow alone, as per the Health department. Agra recorded 565 new cases and three deaths.