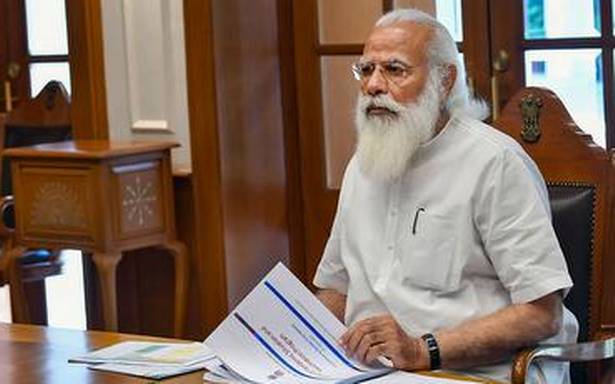 The Russia-made Sputnik V vaccine may be cleared for emergency use in India within 10 days, a highly placed official confirmed to The Hindu on condition of anonymity.

The possible approval for a third vaccine candidate comes as Prime Minister Narendra Modi chaired a high-level meeting on Sunday to review the situation and the on-going vaccination programme with the number of new cases crossing 1 lakh — surpassing the figures recorded in September 2020.

The meeting, attended by senior officials at the Centre including the secretaries of the Home Ministry, Health and Department of Biotechnology, Principal Scientific Adviser, Director General of Indian Council of Medical Research, was of the view that the spike in cases was due to “severe decline in people complying with Covid-appropriate behaviour.”

On April 1, Dr. Reddy’s Labs, which is conducting a trial on the Sputnik V’s suitability on India, was reportedly denied authorisation because the Subject Expert Committee of the Drug Controller General of India asked for more data on the vaccine’s stability.

Sputnik V, developed by Gamaleya Research Institute of Epidemiology and Microbiology, is a two-dose adenovirus based vector vaccine, similar in design to AstraZeneca’s Covishield.

Coronavirus | What is driving the second wave in India?

A challenge with the vaccine is its storage and liquid form of the vaccine requires it to be stored at -18°C or colder storage facilities. The freeze-dried version of the vaccine can be stored in 2-8°C. The company was asked by the regulator to furnish more information on the cold storage management plan and its stability.

Last month, Russian Direct Investment Fund (RDIF) — the main business promoters of the vaccine — announced a contract with three Indian firms for manufacturing more than 300 million doses of the vaccine. It has reported an efficacy of 91% and has so far been approved for use in 59 countries.

“The Sputnik V was discussed and it’s likely to be cleared within the next 7-10 days. In phases, it is expected that vaccines will be available to all adults,” the source, who declined to be identified, confirmed to The Hindu.

This meant, as several communiques from the Centre have reiterated over the past month, that people had largely abjured the use of masks, maintaining distance, pandemic fatigue and that authorities weren’t effectively implementing containment measures at the field level.

A press statement following the briefing stated that a special campaign would be organised for underlying Covid-appropriate behaviour from April 6-14 with emphasis on 100% mask usage, personal hygiene and sanitation at public places /workplaces and health facilities.

The 10 high burden States and UTs were contributing 91.4% of total cases and 90.9% of total deaths in the country.

India’s active caseload rose by 32,688 over the last 24 hours bringing it to nearly 700,000. This brings India’s total no of confirmed cases so far to 12.5 million infections. Maharashtra, Karnataka, Chhattisgarh, Kerala and Punjab cumulatively account for three-fourth of the total active cases in the country with Maharashtra alone accounting for nearly half, according to morning figures from the Health Ministry on Sunday.

There were 93,249 new daily COVID cases were registered in the last 24 hours. 80.96% of these new cases are from eight States- Maharashtra, Chhattisgarh, Karnataka, Delhi, Tamil Nadu, Uttar Pradesh, Madhya Pradesh and Gujarat. Maharashtra has reported the highest daily new cases at 49,447. This is followed by Chhattisgarh with 5,818 cases while Karnataka reported 4,373 new cases. In September, 2020, India’s new daily cases touched 97,000 before registering a decline.

There were 534 deaths reported in the last 24 hours with 8 states accounting for 85% of them.

The cumulative number of COVID19 vaccine doses administered in the country stood at 75.9 million (through 1.2 million sessions) as on Sunday morning according to statement from the Ministry of Health and Family Welfare.

PM Modi, according to the press statement, directed that central teams consisting of public health specialists and clinicians be sent to Maharashtra in view of high case load and deaths, and likewise to Punjab and Chhattisgarh because of the disproportionate number of deaths being reported there.