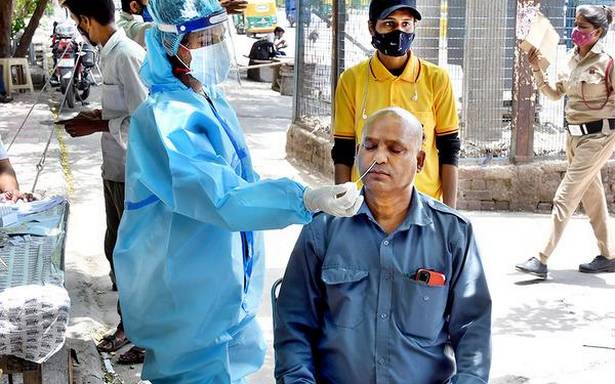 India’s average daily test positivity rate (positive cases identified for every 100 tests) continues to decline. It was 9% on May 30 compared to 12.7% recorded a week before.

About 10.18 lakh vaccine doses were administered in the country in the 24 hours ending 7 a.m. on Monday, which is 20.18 lakh doses fewer than that of the previous 24 hours. However, it is around 75,000 more doses than what was recorded during the same period a week ago.

The Madras High Court on Monday requested Advocate General R. Shunmugasundaram to arrange for an inspection of Renault-Nissan automobile manufacturing unit at Oragadam near Chennai, by a senior official from Directorate of Industrial Safety on Tuesday to ascertain whether all necessary COVID-19 protocols had been followed and to mediate between the management and the workers, if necessary.

First Division Bench of Chief Justice Sanjib Banerjee and Justice Senthilkumar Ramamoorthy hoped that the workers too would resume their duties on Tuesday and arrive at some form of solution to the fears expressed by them with regard to safety, after holding necessary talks with the management in the presence of the mediator. The judges also impressed upon the need to follow the physical distancing norms scrupulously.

The interim orders were passed on a writ petition filed by the workmen challenging the exemption granted by the State government to automobile industries from the ongoing lockdown. Senior counsel V. Prakash contended that the exemption was unwarranted. He claimed that as many as 145 workmen had tested positive for COVID-19 and a considerable number of them were under hospitalisation.

The Tamil Nadu government on Monday informed the Madras High Court that its COVID-19 vaccine stocks would last only for two more days. It has so far vaccinated only 87.7 lakh people, including 75.73 lakh in the age group of 45 and above and 11.97 lakh aged 18 to 44.

The court was also told that the State had sent a communication to the Centre seeking supply of adequate doses on a priority basis.

The submissions were made before the first Division Bench of Chief Justice Sanjib Banerjee and Justice Senthilkumar Ramamoorthy at the hearing of a suo motu public interest litigation petition taken up by the court to monitor the fight against the pandemic.

11 arrested for selling black fungus medicine at ₹60K a vial

The Vijayawada City police arrested 11 persons for blackmarketing medicine for Mucormycosis through WhatsApp contacts on Monday. Police seized 10 vials of Amphotericin-B Liposome from them, according to a release. The gang was caught attempting to sell each vial for ₹60,000.

Police said that some of the gang members were connected through a WhatsApp group. They were allegedly into reselling medicines, oxygen concentrators and others through the group for profit and were asked to procure medicine for black fungus by another gang.

The kin of staff who died after contracting COVID-19 while on polling duty in the Uttar Pradesh panchayat elections, will now be eligible for ex-gratia compensation even if the death occurred 30 days after the day of duty.

The State cabinet headed by Chief Minister Yogi Adityanath on Monday evening passed the proposal to relax the rules of compensation for staff who died on poll duty after criticism from teachers’ unions who had argued that the current rules of compensation laid out by the State Election Commission were not practical for COVID-19.

The unions argued that since people develop symptoms and die days and even weeks after exposure, the SEC’s rule that an official was considered to be on election duty only from the period he or she left their residence for training, polling and counting work till they reached their residence after work, did not make sense.

The government has now increased the eligibility period to 30 days, a government spokesperson said. The cabinet also approved a hike in compensation from ₹15 lakh to ₹30 lakh.

Jharkhand Chief Minister Hemant Soren wrote to Prime Minister Narendra Modi on Monday and sought free Covid jabs for the 18-44 age group, saying the State was unable to incur nearly ₹1,100 crore on it due to stressed resources.

Mr. Soren said the State was battling a deadly second wave of COVID-19 with its limited resources.

"The financial burden on the state for vaccination of the age cohort of 18-44 years is likely to be more than ₹1,100 crore considering 1.57 crore eligible beneficiaries. With vaccine being available for age cohort of 12-18 years and below, the mentioned financial burden will further increase by around ₹1,000 crore. It will be extremely difficult to spare as much resources from the resource pool of the state which is already stressed during Covid times," the letter mentioned.

Singapore will start vaccinating schoolchildren against the coronavirus soon, the Prime Minister said on Monday, after officials warned that new strains were affecting youngsters more.

The city-state, with a population of 5.7 million, recently tightened curbs following a slight uptick in cases, after months of reporting barely any local cases. This included closing schools amid signs that new variants, such as the one first detected in India, were affecting children in greater numbers.

In a televised speech, Prime Minister Lee Hsien Loong announced that school students aged 12 and over will be the next group to be inoculated. Health regulators approved the Pfizer/BioNTech vaccine for 12- to 15-year-olds this month. It was previously only allowed for those aged 16 and above.

The Kerala government has lifted the ban on walking and running for exercise in public spaces as the State entered a relatively less stringent COVID-19 lockdown phase on Monday. Early morning walkers can hit the road between 5 a.m. and 7 a.m. Those who prefer to go for a stroll in the evening can do so between 7 p.m. and 9 p.m.

Stationery shops would remain shuttered. Textile shops, jewellery and footwear showrooms “catering to weddings” can do business till 5 p.m. on Monday, Wednesday and Friday. They should only permit shoppers who furnish wedding cards. The ban on casual sales remained in place. However, such institutions can deliver their wares to citizens at their homes.

The Department of Primary and Secondary Education will examine the possibility of vaccinating second pre-university (II PU) students before conducting the examinations. However, this may pose a challenge as most II PU stiudents are 17 years old, and the vaccine is available only for those who are above the age of 18.

S. Suresh Kumar, Primary and Secondary Education Minister, said that they had received the recommendation from experts. “We will take a decision about vaccinating students appearing for II PU examinations after discussing it with Health and Family Welfare and Medical Education Minister K. Sudhakar," he said.

The department has postponed the examinations, which were scheduled to begin on May 24, due to the rise in COVID-19 cases during the second wave. No decision has been taken regarding the revised examination schedule or how the examinations would be conducted.

Students who have secured admission in colleges or universities abroad, as well as those who want to travel to other countries for work, will be vaccinated on priority basis from June 1.

The National Health Mission has revised the list of preferential groups for vaccination by adding four more groups: students going to foreign countries to pursue studies, those who want to travel outside the country for employment, workers of milk co-operative societies and cable operators.

The decision to include students who want to go abroad as part of this list was taken based on the suggestion given by Deputy Chief Minister and Higher Education Minister C.N. Ashwath Narayan, who also heads the State COVID-19 task force. The Minister, in a press release, said those who want to get the jab should have a visa, admission receipts, or any such relevant documents. They will be administered Covishield.