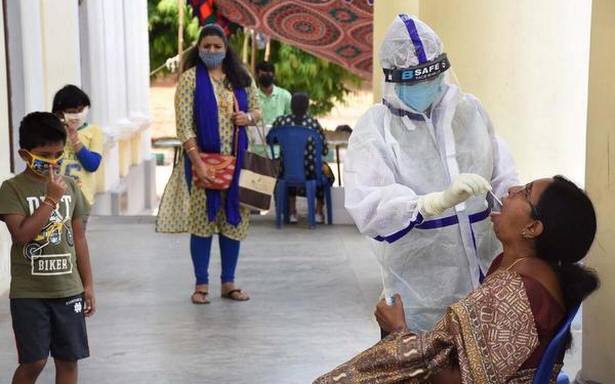 Recording a steep rise, Karnataka on Monday reported 5,279 cases of COVID-19, of which 3,728 cases were from Bengaluru Urban. The State reported 32 more deaths. The test positivity rate (TPR) for the day stood at 5.39%.

The State on Monday received 15 lakh doses of COVID-19 vaccine.

With the Centre freezing fresh registrations for vaccination of healthcare and frontline workers, many of them turned up to get immunised but were sent back.

M.K. Sudharshan, head of the State’s Technical Advisory Committee said, as a goodwill gesture they should be given one last chance and vaccination opened for all above 18 soon. The State had vaccinated 45,95,086 so far.

JD(S) supremo H.D. Deve Gowda, hospitalised with mild symptoms as a contact of his wife who tested positive on March 31, was discharged from Manipal Hospitals on Monday. His wife, Chenamma Deve Gowda was also discharged.

Kerala reported 2,357 new cases on Monday, with TPR of 5.86%. There were 12 new deaths recorded. Kozhikode reported four deaths, Kollam three, and Kannur two, while one death each was reported from Thiruvananthapuram, Alappuzha and Kottayam.

Telangana recorded over 1,000 infections for the third day with 1,097 persons found positive on Sunday.

There were 302 cases on Sunday in Greater Hyderabad municipal region.

(With inputs from Thiruvananthapuram, Hyderabad and Vijayawada bureaus)