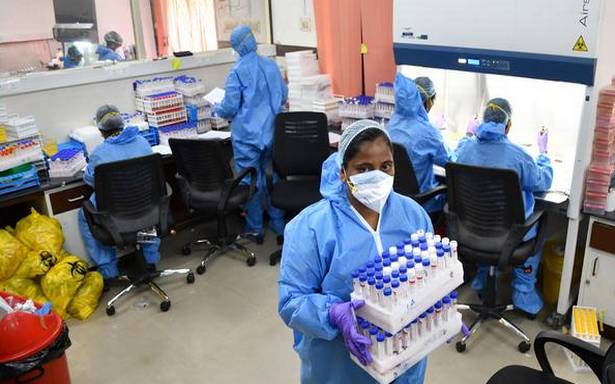 From the last five weeks, there has been a continuous decline in the average daily new cases.

With focussed strategies and calibrated measures, India has sustained its global position of being the country with one of the lowest COVID-19 cases per million and reported deaths per million, the Union Health Ministry said on Tuesday.

From the last five weeks, there has been a continuous decline in the average daily new cases.

“The weekly average of daily new cases fell from 92,830 cases in the 2nd week of September to 70,114 cases in the second week of October,” the ministry said.

India is reporting a consistent slide in the new confirmed cases with 55,342 fresh infections being registered in a span of 24 hours in the country.

The new low in daily cases is the result of collaborative action by states and UTs under the Centre’s strategy of comprehensive and aggressive testing, prompt tracking and surveillance, hospitalization and adherence to the Standard Treatment Protocol which has ensured a standardised quality of medical care across the public and private hospitals and for home isolation, the ministry said.

While the global figure for COVID-19 cases per million is 4,794, India is clocking 5,199 infections.

The deaths/million in India are 79, while the world average is 138.

“As far tests for detection of COVID-19 are concerned, India is one of the topmost countries,” the ministry highlighted.

Higher numbers of testing on a sustained basis have aided the early identification and timely treatment which leads to higher recoveries and lower fatality rate, the ministry underlined.

“It would be unfair to compare India with high income countries such as USA, UK, Russia, France etc. as they are not on an equal footing. This is primarily because of its population dynamics which results in a lopsided distribution of resources.

“On parameters such as on the availability of doctors and nurses per million, as also the percentage of GDP spent on health, India’s comparison with the other high income countries would present a skewed analysis. Given the larger context, India’s targeted strategies in COVID-19 management and the public health response over the last several months have resulted in encouraging outcomes,” the ministry said.

India continues to report a trend of steadily decreasing active cases, the ministry underscored. Presently the active cases comprise merely 11.69% of the total COVID-19 caseload of the country standing at 8,38,729.

The active cases have been below the 9 lakh mark for the fifth consecutive day, the ministry said.

The ministry said that 76% of new cases are from 10 states and UTs. Karnataka has overtaken Maharashtra with the highest number of new reported cases. Both still are contributing more than 7,000 new cases. The States which are reporting spurt in cases are Karnataka, Kerala, Rajasthan, West Bengal and Chhattisgarh.

“Higher number of single-day recoveries is also reflected in the continuous increase in the national recovery rate, which is at present 86.78 per cent,” the ministry said.

Besides, 78% of the new recovered cases are in 10 States and UTs.

Maharashtra contributes more than 15,000 to the single-day recovery followed by Karnataka with more than 12,000 recoveries.

The number of fatalities due to COVID-19 has been lower than 1000 mark for the successive days. A total 706 case fatalities have been reported in a span of 24 hours. Of these, nearly 79 per cent are concentrated in ten states and UTs, the ministry said.

More than 23 per cent of new fatalities reported are from Maharashtra (165 deaths).

Maharashtra contributes more than 15,000 to the single-day recovery followed by Karnataka with more than 12,000 recoveries.

10/13/2020 India Comments Off on Coronavirus | India continues to be among countries with lowest per million COVID-19 cases, deaths
TV & Movies