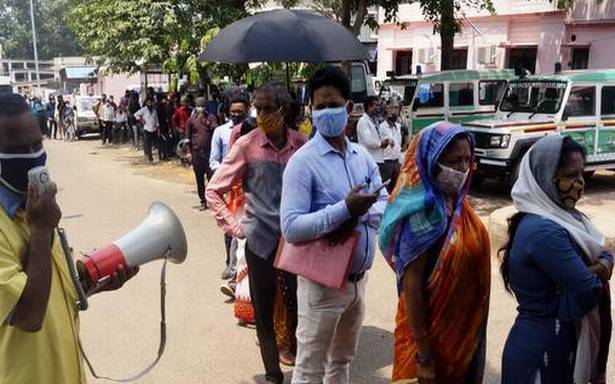 For the third consecutive day, India recorded over 3,000 deaths due to COVID-19, with 3,443 fatalities until 11 p.m. on Thursday. The country accounted for nearly one in every four deaths in the world due to the virus as on Wednesday.

The figures do not include cases and deaths from Ladakh. The data are sourced from covid19india.org, an independent aggregator of daily figures.

India’s average daily deaths over the last seven days rose to 2,882 and remained the highest in the world.

Among the five countries with the highest death toll due to the virus — the U.S., Brazil, Mexico, India and the U.K., fatalities are on a rising trend only in India.

The number of daily vaccine doses administered in the country dropped for the second consecutive day, with 21.9 lakh shots given in the 24 hours ending 7 a.m. on Thursday, about 3.6 lakh doses less than what was recorded in the previous 24 hours.

The daily vaccination rate has been on a declining trend in the second half of April compared to the first. Between April 1-14, India administered 35.26 lakh doses on an average every day. However, between April 15-28, the average daily doses given fell to 25.37 lakh.

Nearly 17.7 lakh tests were conducted on Wednesday (results of which were made available on Thursday), over 44,000 more samples compared to the previous day.