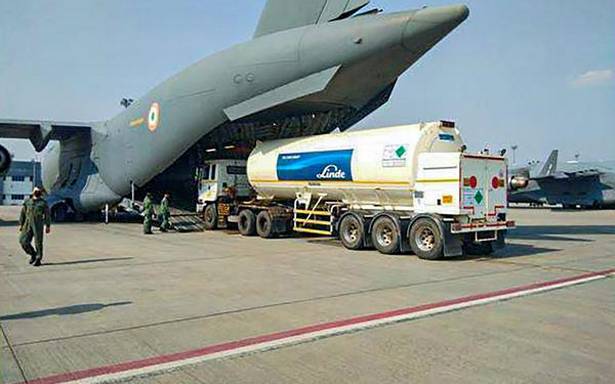 Empty oxygen tankers will be flown back by IAF planes to refilling plants to save time after they deliver supplies to hospitals, Maharashtra health minister Rajesh Tope said on Friday.

The Indian Air Force’s special planes will be used for this purpose, he said.

Mr. Tope was speaking to reporters after attending a meeting held by Prime Minister Narendra Modi to discuss the worsening COVID-19 situation in the country.

"It is going to take some time for trains carrying oxygen to reach Maharashtra. But to save time, empty tankers will be flown back by Air Force planes. This decision was taken in today’s meeting," he said.

A special `Oxygen Express’ loaded with tankers of liquid medical oxygen left for Maharashtra from Visakhapatnam on Thursday.

"Maharashtra’s active COVID-19 caseload is around seven lakh. Generally 10% of cases worsen to become medically critical – moderate and severe. We demanded that oxygen supply should be in proportion to patients," Mr. Tope said.

Chief ministers of other States made the same demand, he added.

Mr. Modi said he will hold another meeting with oxygen suppliers to address the issue of shortages, the minister said.

The prime minister also suggested the use of Pressure Swing Adsorption oxygen generation plants in large numbers so that the life-saving gas becomes available locally quicker, he said.

The food packaging industry uses technology which collects nitrogen by separating it from the air, and it can be used to collect oxygen too, Mr. Tope said.

Pune-based Vasantdada Sugar Institute, headed by NCP chief Sharad Pawar, has also asked sugar mills to produce oxygen for medical use which will require only a minor modification in the machinery used by these mills, he said.

The health minister also said that Maharashtra demanded that Remdesivir, used to treat coronavirus patients, be supplied in proportion to the number of active patients in a State.

"We communicated this demand to the Centre in today’s meeting," he said.