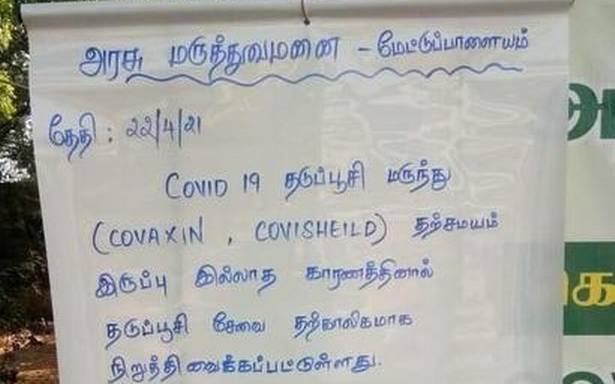 A photograph of a board in front of the Mettupalayam Government Hospital stating that the vaccination drive was halted due to unavailability, was widely circulated on social media

The shortage of COVID-19 vaccines in healthcare facilities in Coimbatore district became evident after a board was placed in front of the Mettupalayam Government Hospital on Thursday which said that the vaccination drive was temporarily stopped due to unavailability of Covishield and Covaxin vials.

The photograph of the board was widely circulated on social media and when it came to the attention of district authorities and senior officials with the Health Department, the hospital was allotted with vaccine doses on Friday.

Sources said that senior officials chided those who placed the board at the hospital and told them that they could have personally informed people who came to receive the vaccine jabs.

Sources with many hospitals in the district said that they had minimal stocks of the COVID-19 vaccines and the majority of them had doses of Covishiled alone.

People who had already taken their first dose of Covaxin were told by many hospitals that they were out of stock of the vaccine when they came for the second shot.

“I took the first dose of Covaxin from Mettupalayam GH on March 24. I was asked to come for the second shot on Thursday. I was told that Covaxin was out of stock when I enquired with the vaccine centre at the hospital on Wednesday. The reply was the same when I checked again on Thursday and Friday morning,” said a journalist attached to a Tamil news channel from Mettupalayam.

A spokesperson attached to a private hospital in Coimbatore said that it had not had stock of Covaxin for the last three-four days. “It is the Health Department that allots us vaccines as of now – Covaxin or Covishield. We can only offer to people what is supplied by the Department,” the spokesperson said.