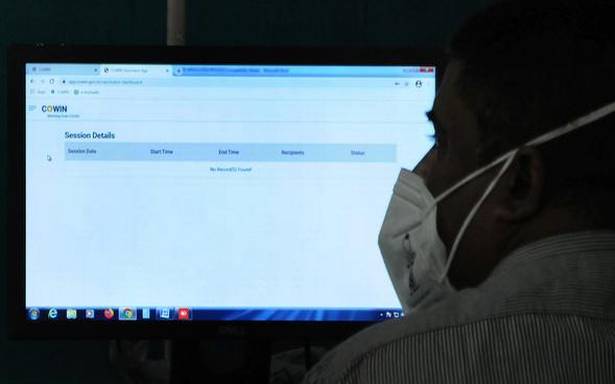 India’s CoWIN portal, for COVID-19 vaccine registration, has been ramped up to accept on one crore registrations and record vaccination of 50 lakh persons per day, R.S. Sharma, Chairman, Empowered Group on COVID vaccination told The Hindu. Mr Sharma explained that the system has been geared up to accommodate the registration rush and vaccination load anticipated from April 1 when vaccination will be offered for anyone 45 years and above.

The system shows a registration of over 6 crore beneficiaries as on Sunday.

“Upgrading the system is a continuous process and with the increase in load, the system has been acclimatized to take on the load that is expected. We have seen the trends so far and the number of people seeking the vaccine has grown. The system is operating at four levels — the one that is open to public (for registration), the verification level, platform management (open to hospitals giving the vaccine) and the certificate generation,” Mr Sharma said.

Stating that this “hundred per cent government run” system is equipped to offer privacy, Mr. Sharma, however, admitted that there are reports of errors in registration from several parts of the country.

“During self-registration and spot registration we are seeking only three basic information — name, gender and year of birth. We expect that this will be provided correctly by the beneficiaries,” he said.

Mr. Sharma added that currently CoWIN does not schedule the second dose vaccination appointment automatically and beneficiaries are to schedule this as per the recommended gap between the two doses of the vaccine.

The toll is the highest single day figure since December 25, 2020, when 336 deaths were reported.

It added that Maharashtra has reported the highest daily new cases at 35,726, followed by Chhattisgarh with 3,162 while Karnataka reported 2,886 new cases. India’s total active caseload has reached 4,86,310 and cumulative recoveries stand at 1,13,23,762 with 28,739 recoveries were registered in the last 24 hours. Maharashtra has also reported the most number of single day recoveries at 14,523.

Six States account for 82.69% of the new deaths, said the Ministry release adding that Maharashtra saw the maximum casualties (166), Punjab follows with 45 daily deaths and Kerala reported 14 deaths in the last 24 hours.