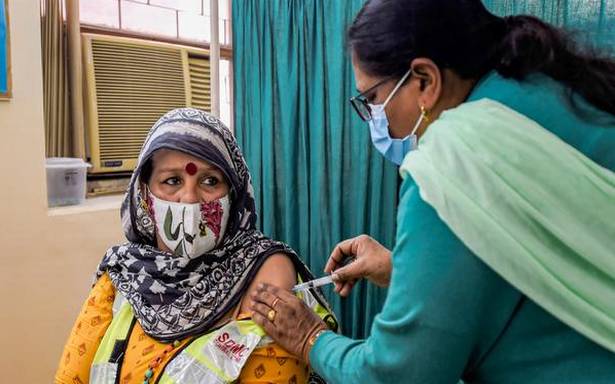 Even accounting for differential allocation of vaccines, only a fraction opted for it, data show

As on February 21, the uptake of Bharat Biotech’s Covaxin for COVID-19 across India was about 10%, Health Ministry data show. The reception to the vaccine stands in contrast to Covishield, manufactured by the the Serum Institute of India, which accounts for the remaining 90%. Of the 10.6 million doses administered, 10,37,565 are Covaxin.

On January 3, the Indian regulator approved Covaxin for restricted use “under clinical trial mode” as a matter of “abundant caution” even when no interim data of phase-3 trial was available. Post-approval, a dozen scientists issued a statement demanding efficacy data before vaccination could begin.

Not a single dose of Covaxin had been administered in Chhattisgarh, while three Union Territories — Puducherry, Andaman and Nicobar Islands and Daman & Diu — did not report any uptake of the vaccine as on February 21.

Many States and Union Territories reported low uptake compared to Covishield. Punjab administered the vaccine only to 91 people, while Goa immunised just one person with it. The other States with low uptake were Nagaland (4 people), Mizoram (4), Lakshadweep (4), Chandigarh (9), Manipur (29), Tripura (30), Ladakh (31), Himachal Pradesh (38), Meghalaya (49), Arunachal Pradesh (54), Uttarakhand (69), and Sikkim (128). Except Sikkim, where the uptake was 1%, it was less than 1% in 12 States and Union Territories.

Also read: No takers for Covaxin among frontline workers

Also read: Covaxin not to be used in cases of allergy, fever, poor immunity

“The difference in coverage is a function of differential allocation of the Covaxin doses to different States. This is further confounded by delayed communication of the information and lack of data on efficacy,” epidemiologist Dr. Giridhara Babu, a member of the Karnataka COVID-19 Technical Advisory Committee, said in an email to The Hindu.

In response to a Parliamentary question, the Health Ministry said on February 5 that as on February 1, nearly 2.6 million Covaxin doses were distributed to 19 States and UTs. At 1,89,920, Tamil Nadu was provided the most (Covishield was a little over one million).

Chhattisgarh, Jharkand, Punjab, and Kerala were each provided the lowest number (37,760).

On January 10, in a tweet, T.S. Singh Deo, the Chhattisgarh Health Minister, said: “We do not support the use of Covaxin in the vaccination process in Chhattisgarh for one simple reason — it is not safe to use any vaccine unless it has completed the recommended testing process with absolute authentication and success.”

All vaccines approved for emergency use by regulators, including Pfizer, Moderna and AstraZeneca, have been based on interim analysis of phase-3 trials. The phase-3 trials of these vaccines are still under way.