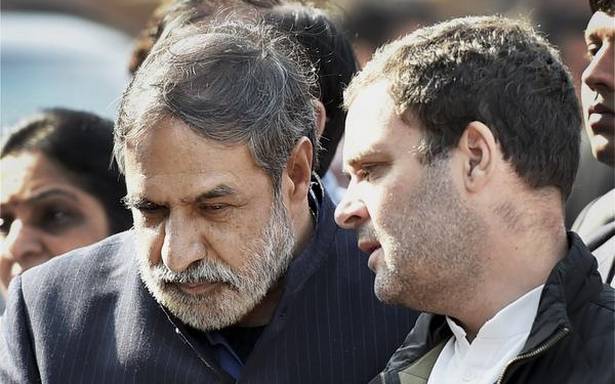 Deputy leader of the Congress in the Rajya Sabha Anand Sharma on Saturday said the Narendra Modi government must be held “morally and politically accountable” for the deaths of COVID-19 patients due to a shortage of oxygen and life-saving medicines.

While former Congress chief Rahul Gandhi asked the Centre to focus on oxygen shortage, vaccines and other health infrastructure instead of undertaking public relations activities and unnecessary projects (a reference to the Central Vista project), Congress general secretary Ajay Maken pointed out that the Parliamentary Standing Committee on Health had flagged the issue of supply of oxygen in their November 2020 report.

Former Finance Minister P. Chidamabaram said the Centre was making “hollow” claims about no vaccine shortage, and cautioned the government that it could face protests if it did not prepare for the May 1 vaccine roll-out for all adults.

“Accountability of government is integral to democracy. This government must be held morally and politically accountable,” Mr. Sharma, who is recovering from COVID-19 at a Gurugram hospital, said on Twitter.

“Reminding the Prime Minister and his colleagues that India cannot be micromanaged in a pandemic. The responsibility for the deaths of Indian citizens for shortage of oxygen and medicines lies squarely at the doorstep of the government,” he added.

Mr. Sharma said the unfolding tragedy of citizens dying for want of medicines and oxygen had shocked the collective conscience of the nation, but the government was living in “brazen denial”. “Why was no exigency plan put in place? Why was oxygen emergency reserve not created? Who is responsible for rampant black marketing of life-saving medicines,” he asked.

At a virtual press conference held to launch Congress’s digital television INC TV, Mr. Maken said if the media had asked questions to the government about the parliamentary panel report earlier, the government may have been better placed to handle the “man-made oxygen crisis”.

“It’s a 190-page report and the word ‘oxygen’ has been mentioned 40 times in the report. The Parliamentary panel had alerted the government well in time. Why have no oxygen plants come up in Delhi, whereas states like Rajasthan have set up 24 out of the 37 PSA units [pressure swing absorption units to produce oxygen for hospitals] sanctioned in the past one year and seven big oxygen storage plants?” he asked.

In a separate statement, Mr. Chidambaram welcomed the decision to vaccinate everyone above 18 years but warned of shortage.

“The government’s claim that there is no shortage of vaccines is hollow and untrue. When the surge in demand happens on May 1 and more people flock to hospitals for vaccination, will there be adequate stocks of vaccines all over the country? If people are turned away at hospitals, there will be great resentment and protests,” Mr. Chidambaram said, urging the government to prepare now.

04/24/2021 India Comments Off on Coronavirus | Centre must be held accountable: Congress
India