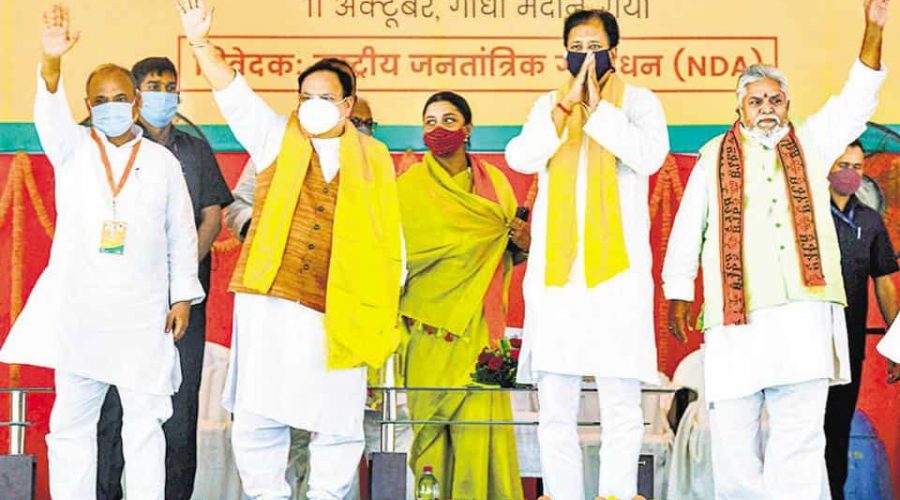 The Gaya district administration lodged an FIR against the organizers who organized an event of BJP national president JP Nadda on October 11 for violating social distancing norms as laid down by the Election Commission of India (ECI) in view of Covid-19 pandemic.

The FIR has been lodged with the civil lines police station on the basis of the statement of Circle Officer (CO) Rajiv Ranjan.

Officials said that following inputs regarding violation of social distancing norms at the Gandhi Maidan, Sadar SDO Indravir Kumar ordered the town CO to investigate the matter and submit a report.

People, who took part in this rally, allegedly violated the guidelines by not wearing masks and not maintaining social distancing, police said.

SHO Uday Kumar said that the FIR has been lodged against BJP’s general secretary Prashant Kumar and other members of the organizing committee. They were booked under IPC sections 188 (disobedience to order duly promulgated by public servant), 269 (unlawful and negligent act which is likely to spread infection of any disease dangerous to life) and Section 270 IPC (Malignant act likely to spread infection of disease danger¬ous to life). The violation invites an imprisonment for a term which may extend to two years, or with fine, or both.

Police said that on the day of the political function, Nadda along with former CM Jitan Ram Manjhi, RCP Singh, Sanjay Jaiswal, minister Dr Prem Kumar and other political leaders were present on the stage.

During their speech peoples flouted the Covid-19 norms and most of them were found not wearing the mask.

“Others who took part in the rally are being identified on the basis of video footage,” the SHO added.

Earlier on October 8, the ministry of home affairs permitted conditional political gatherings in poll-bound Bihar. It capped the maximum number of people in a closed space or a hall at 200, while in an open space, it would depend on the area.

As per the conditions, for holding political gatherings in closed spaces, a maximum of 50% of the hall capacity will be allowed with a ceiling of 200 persons and wearing of masks, maintaining social distancing, provision for thermal scanning and use of hand wash or sanitizers will be mandatory. The political gatherings can be held only outside the containment zones.