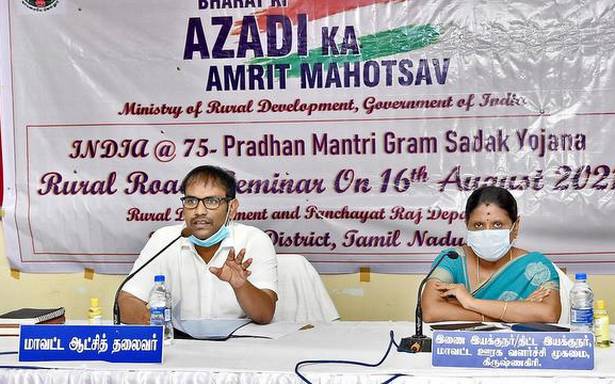 A consultative meeting on providing connectivity to villages without motorable roads under the Pradhan Mantri Gram Sadak Yojana was held here under the aegis of Collector V. Jayachandra Bhanu Reddy on Monday. The consultation was part of the 75th Independence Day celebrations.

The Pradhan Mantri Gram Sadak Yojana that came into force in 2000 is being implemented in three phases. Under the programme, the administration jointly with the State government enables road connectivity to villages.

Speaking at the meeting, Dr. Reddy said the administration supported by the State government was planning motorable roads to those villages without road facilities under the scheme. Under the programme, currently in Phase III, the unconnected villages will be connected to the roads linking schools, hospitals along with the development of the rural roads already in existence. As on date, under the Phase III of the programme (2019-20), an estimated 69.035 km long roads have been taken up for construction at a cumulative cost of ₹38.81 crore.

The State government has allocated funds to the maintenance of the roads and the same has been assigned to a contractor for a period of five years. The works under the Scheme is being monitored by the Union government through Emarg, a separate monitoring portal, according to the administration.

According to the Collector, the works taken up under the scheme are subjected to three grade quality control.

Dr. Reddy called upon the contractors to subject their works to quality control through the established labs in the district.