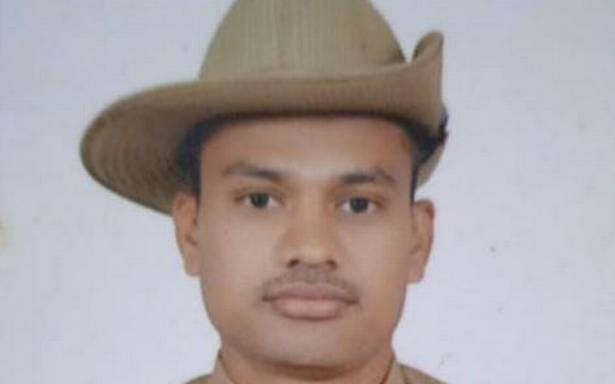 He fell while trying to evade arrest

A police constable attached to Yelahanka station climbed down a 25 ft deep well in the rain at night to save a suspect who had fallen into it while trying to evade arrest. Constable Shivakumar was part of the team tracking the suspect.

The incident occurred in Thoppur village in Dharmapuri, Tamil Nadu, where the man they were tracking and two of his associates were hiding after allegedly committing a robbery in Yelahanka on October 3. They had reportedly assaulted a sales executive of a private firm, and robbed him of his gold chain, phone, and ₹3,000 in cash.

Based on his complaint, Yelahanka police station inspector K.P. Sathyanarayan and the team analysed CCTV footage and identified the accused. A team went to secure their arrest but the accused escaped to Thoppur village.

Mr. Sathyanarayan, Mr. Shivakumar and others arrived at the village on Sunday night and surrounded the trio. They fled, but one of them fell into the well and drowned. “It was a forest area and pitch dark. Mr. Shivakumar who was chasing the accused realised the danger. Without wasting time, he tied a rope brought from the jeep, secured it, and scaled down the well,” said a police officer.

With the help of other staff, the accused and Mr. Shivakumar were pulled out.

The suspect did not know how to swim and appeared to be under the influence of alcohol. “He was brought back to station for questioning while efforts are on to track down his associates,” the police officer added.

Police Commissioner Kamal Pant commended Mr. Shivakumar for his act of bravery and announced a reward.