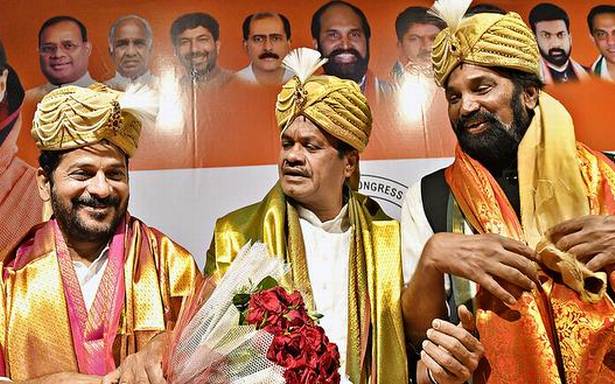 BJP’s win is a fluke, say Uttam, Revanth and Komatireddy

The Telangana Congress argued that Parliament results showcased the strength of the party in the State and termed the success of Bharatiya Janata Party (BJP) a fluke.

People wanted to vote for the Congress and against the ruling TRS but at some places they chose the BJP as their candidates appeared stronger to beat the TRS, TPCC president and Nalgonda MP-elect N. Uttam Kumar Reddy said at press conference here.

Putting up a united show, the three newly elected members of Parliament from Congress — Mr. Uttam Kumar Reddy, Malkajgiri MP-elect A. Revanth Reddy and Bhongir MP-elect Komatireddy Venkata Reddy — said their victory proved that the Congress was the only alternative in Telangana.

“Though the BJP won four seats, it is the Congress that would remain as the only alternative to the TRS,” Mr. Uttam Reddy said downplaying the upsurge of BJP. He said Telangana was always secular and will remain secular. BJP’s success was an aberration and due to factors other than political.

Mr. Reddy said people were determined to vote against the TRS and the number of votes they secured in various constituencies compared to the Assembly elections were much higher. “Either we have reduced the deficit by a large margin or improved our margins over the rival TRS candidates,” he declared.

The TPCC chief said the Congress MPs will unitedly fight for the fulfilment of promises made in the A.P. Reorganisation Act and getting national status for any irrigation project would be their priority. “KCR has failed and people have reposed faith in us.”

Mr. Revanth Reddy said his win in Malkajgiri was sweet because it represents 13% of Telangana’s population, and they also realised that they need a voice that questions. He said people voted against TRS and KCR this time and the enormous reduction in margins only prove that.

He laughed at rumours in social media of his intentions to join the BJP and said he would continue to fight against the anti-democratic rule of both KCR and Prime Minister Narendra Modi. “I will be representing the biggest constituency in the country in Parliament and in a way it represents India given the migrant population from all part of the country in Malkajgiri,” he said.

Mr. Uttam Reddy said Telangana Congress has full faith in Mr. Rahul Gandhi’s leadership and requested him to withdraw his resignation as the AICC president.

Earlier, the three newly-elected members of Parliament were felicitated by the party workers and leaders at the TPCC headquarters Gandhi Bhavan.