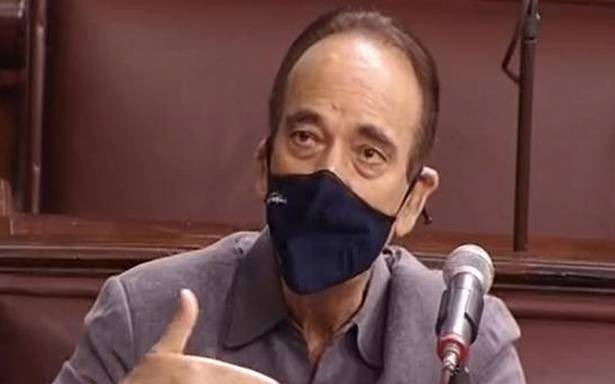 The Congress party’s ‘structure’ has collapsed and needs to be rebuilt by having elected leaders from the block to the Congress Working Committee (CWC) level and enforce accountability in the system, Leader of the Opposition in the Rajya Sabha, Ghulam Nabi Azad, said on Sunday.

Mr. Azad, in an interview to the news agency Asia News International (ANI), however, asserted that there was ‘no rebellion but a call to reform the Congress and become a national alternative’.

Also Read | No leadership crisis in Congress; support for Sonia, Rahul apparent to ‘anyone not blind’: Khurshid

He also gave a ‘clean chit’ to the Gandhis as they couldn’t have effected drastic changes during the COVID-19 pandemic but claimed that they have agreed to their demand of having an elected party chief, CWC members and other levels of leadership.

Mr. Azad is part of the group of 23 (G-23) leaders who, in August, had sent a letter to Congress president Sonia Gandhi in which they demanded a “visible, effective and full-time leader” and set up an institutional mechanism to provide “collective leadership.”

“There is no rebellion in the Congress party. Rebellion means replacing someone. There is no other candidate for the post of party president. This is not a rebellion. This is for reforms,” Mr. Azad said, adding “sycophancy in any party leads to its downfall.”

“I am giving a clean chit to the Gandhis due to the COVID-19 pandemic as they can’t do much right now. There is no change in our demands. They have agreed to most of our demands. Our leadership should hold elections if they want to become a national alternative and revive the party,” he added.

ANI quoted Mr. Azad as saying that “the Congress is on its lowest in the last 72 years. The Congress does not have even the post of Leader of the Opposition in the Lok Sabha during last two terms.” The party’s victory in the 9 seats of the Ladakh Hill Council elections was a surprise, he said.

Breaking his silence on Bihar election results, Mr. Azad said a five-star culture had seeped into the party and candidates first checked into a luxury hotel after getting party ticket to contest an election.

“Our party’s structure has collapsed. We need to rebuild our structure and then if any leader is elected in that structure, it will work. But to say that just by changing the leader we will win Bihar, Uttar Pradesh, Madhya Pradesh etc. is wrong. That will happen once we change the system. Until we change our way of functioning at every level, things won’t change,” he said.

In a separate interview to PTI, former Union Minister Salman Khursid, however, strongly defended the Gandhis. “I think that it is apparent to anyone who is not blind, that people are fully supportive of Congress president Sonia ji and Rahul Gandhi, who is our former president. Everybody supports them,” he said.