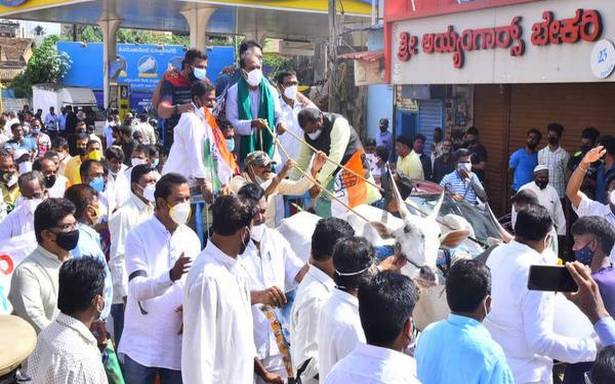 Congress leaders across the country held physical protests outside petrol pumps to protest against the rising prices of petrol and diesel and demanded a complete rollback of fuel price hike.

Arguing the tax on petrol and diesel stood at ₹9.20 during UPA, Mr Venugopal said it is now ₹32.

“The government should stop imposing excise duty on petrol and diesel. It should come under the purview of Goods and Services Tax. We demand a complete rollback of fuel price hike,” Mr. Venugopal said.

While Ajay Maken led a protest at petrol pumps in Rajinder Nagar and Janpath, Indian Youth Congress (IYC) President Srinivas BV accused the government of spending the tax collected on diesel and petrol on “extravagant projects”.

“The reduction in fuel prices comes only on the occasion of elections. The BJP’s loot starts again as soon as it gets time from the election campaign,” Mr. Srinivas alleged.

Some IYC members protested shirtless at a petrol pump at Janpath with posters criticising fuel price hike taped to their chest but the Police detained over 30 protesters from the location for flouting Covid protocol.

Priyanka Gandhi Vadra tweeted, “During the pandemic, Modi government collected taxes on petrol-diesel: ₹2.74 lakh crore.” “What all could have been done with this money: Vaccines for the whole country (₹67,000 crore)+ oxygen plants in 718 districts+ AIIMS hospital in 29 states + ₹6,000 as help to 25 crore poor people. But nothing was done,” the Congress general secretary tweeted in Hindi using the hashtag ‘BJPLootingIndia’.

Petrol prices have crossed the ₹100 per litre mark in Madhya Pradesh, Maharashtra, Andhra Pradesh, Telangana, Rajasthan, Ladakh and is the most expensive in Sri Ganganagar district of Rajasthan with petrol selling at ₹106.94 a litre and diesel at ₹99.80.