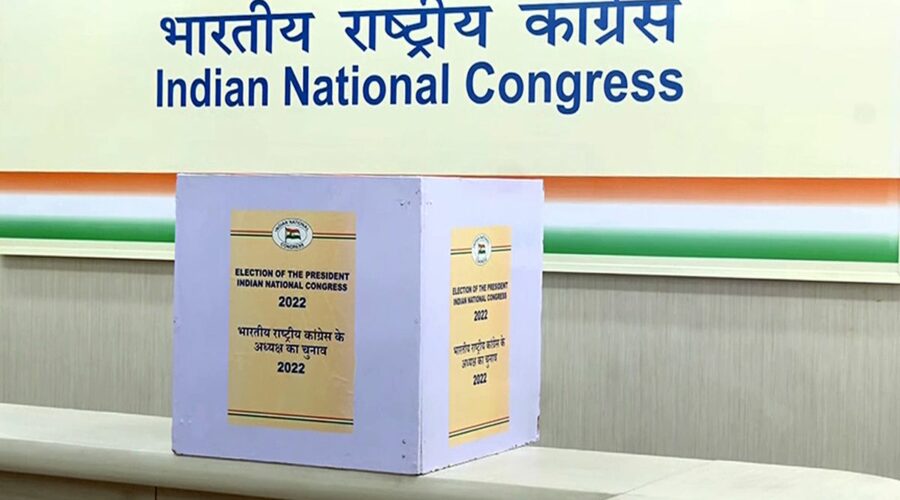 With the Congress set to vote to elect its new chief, it would be the sixth time in its nearly 137-year-old history that an electoral contest would decide who would take up the mantle of the party’s president.

Also, with Sonia Gandhi, Rahul Gandhi and Priyanka Gandhi Vadra not in the running for the party president’s post, a non-Gandhi would be at the helm after over 24 years following the polling on Monday and counting on Wednesday.

Senior party leaders Mallikarjun Kharge and Shashi Tharoor are pitted against each other and have been crisscrossing various state capitals to woo the over 9,000 Pradesh Congress Committee (PCC) delegates who comprise the electoral college for electing the party chief.

While Kharge is considered the firm favourite and the ‘unofficial official candidate’ with a large number of senior leaders backing him, Tharoor has pitched himself as the candidate of change.

During the campaign, even though Tharoor has raised issues of uneven playing field, both candidates and the party have maintained that the Gandhis are neutral and that there is no ‘official candidate’.

Asked about the significance of the polls, Congress general secretary in-charge communications Jairam Ramesh told PTI, “This is actually the sixth time that the Congress is having internal elections for its president in its 137-year-history.”

Ramesh said he has always believed in the Congress model of evolving a consensus for such positions, noting that the most famous practitioner of this approach in the post-Nehruvian era was K Kamaraj.

“As we approach E-Day tomorrow this belief has become even more stronger. The reasons for this are pretty obvious,” he said without elaborating.

“I am not at all convinced that organisational elections actually strengthen the organisation in any way. They may serve individual purposes but their value in building a collective spirit is doubtful,” he said.

Even so, the very fact that elections are taking place are of some significance, he added.

“But I consider them of less institutional importance than the historic Bharat Jodo Yatra which is a transformational initiative for the Congress and for Indian politics as well,” Ramesh said.

The Congress has claimed that its internal democracy has no parallel in any other party and it is the only one to have a central election authority for organisational polls.

It was way back in 1939, when an electoral contest decided who would be Congress president and in fact, Mahatma Gandhi’s candidate P Sitaramayya had lost to Netaji Subhas Chandra Bose.

Then in 1950 came the Congress’ first election post-Independence for the post of party president when Purshotttam Das Tandon and Acharya Kripalani faced off for the top post.

Surprisingly, Tandon, seen as a Sardar Vallabhbhai Patel loyalist, had won the contest trumping the then PM Jawaharlal Nehru’s choice.

In 1977, following the resignation of Dev Kant Barooah as party president in the wake of the defeat in the Lok Sabha polls, K Brahmananda Reddy defeated Siddhartha Shankar Ray and Karan Singh in the party’s polls for All India Congress Committee chief.

The next election that needed a contest came 20 years later in 1997 when Sitaram Kesri squared off in a triangular contest with Sharad Pawar and Rajesh Pilot.

Except for Maharashtra and parts of Uttar Pradesh, all state Congress units had backed Kesri.

He had posted a landslide victory getting 6,224 delegates’ votes against Pawar’s 882 and Pilot’s 354.

The third contest came in 2000 and this was the only time a Gandhi family member was challenged in the elections with Jitendra Prasada taking on Sonia Gandhi.

Prasada suffered a crushing defeat at the hands of Sonia Gandhi who garnered over 7,400 votes, while Prasada reportedly polled a paltry 94.

The upcoming polls would certainly be historic as the new president would replace Sonia Gandhi, the longest-serving party president who has been at the helm since 1998, barring the two years between 2017 and 2019 when Rahul Gandhi took over.

In the post-Independence era, a person from the Gandhi family has been at the helm of the party for about 40 years in total.

After Independence, with Sitaramayya assuming office as AICC chief in 1948, the party has been led by 17 people so far, of which five have been presidents from the Gandhi family.

In 1947, Acharya Kriplani was the president after which Sitaramayya assumed office as party chief post-independence in 1948-49.

Nehru left the post of Congress president in 1955 and U N Dhebar took over the reins of the party.

Indira Gandhi was the Congress president in 1959, followed by N S Reddy who remained at the helm till 1963.

Indira Gandhi again became the Congress president and held the reins of the party from 1978-1984.

From 1985 to 1991 after the assassination of Indira Gandhi, her son Rajiv Gandhi was the Congress president.

Kesri assumed the presidency after that and was replaced by Sonia Gandhi in 1998.

She remained at the helm till 2017, when Rahul Gandhi became president.