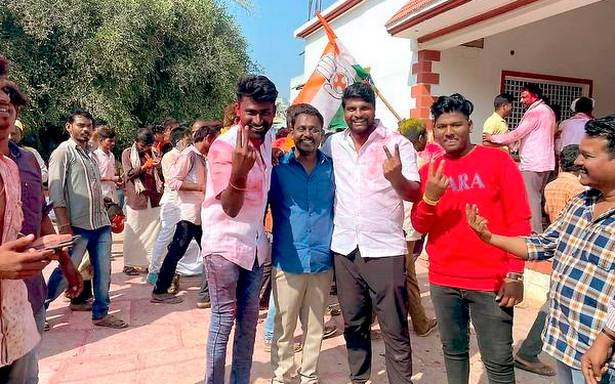 The Congress seems to have performed better in many Assembly constituencies currently represented by the BJP legislators, including Chief Minister Basavaraj Bommai, in the elections to 58 Urban Local Bodies, the results of which were out on Thursday.

While in many places, the ruling BJP ceded ground to the Congress in the ULBs, in some urban pockets currently represented by the BJP, mixed results have come up. In all, of the 1,184 seats in 58 ULBs for which polls were held, the Congress registered victories in 501 seats while the BJP won in 433 seats. JD(S) managed just 45 seats, and 195 Independents won.

A closer look at the Congress’ performance shows that it managed well in constituencies such as Kanakagiri, Hungund, Harihar, Nippani, Shiggaon, Navalgund, Kagwad, Arabhavi, and Muddebihal, among others, that are represented by the BJP. In Rayabagh, Kittur, Saundatti, Nippani, and Kittur also represented by the BJP, the poll results have thrown hung results that can also tilt in the favour of the Congress. In some ULBs in Kittur and Arabhavi, represented by legislators from the ruling BJP, all seats have been won by Independents.

In Hospet Municipal Council, the BJP failed to register majority, while in Sira where the BJP registered victory in the high-profile byelections fought bitterly after the demise of JD(S) legislator Satyanarayana, the BJP managed just four seats as the municipal council returned with mixed results. The support of JD(S) is crucial to any party to come to power.

Of the five City Municipal Councils that went to polls, the BJP managed to win three, while two are hanging. Of the 19 Town Municipal Councils, the BJP and the Congress won seven each, while four are hanging with the JD(S) winning one. In the 34 town panchayats that faced polls, the Congress registered victory in 13, while the BJP won nine, and 12 town panchayats reported mixed results.

However, in the midst of success, Congress lost ground to BJP in Anekal, Koppal, and Basavana Bagewadi. In Maski, where the party won the bypolls, it ceded ground to the BJP. Tavargera town panchayat in Kushthagi saw mixed results though Congress is likely to come to power with the support of Independents.