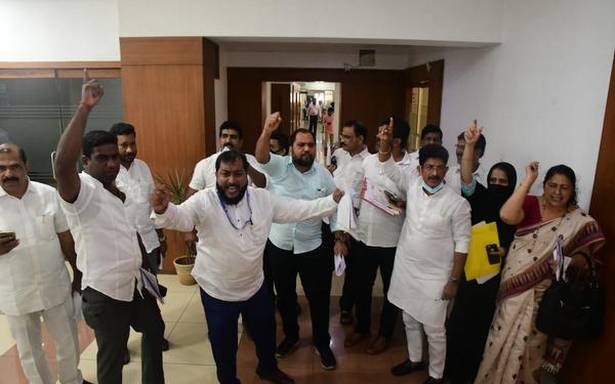 They resort to move after Mayor defers decision on recognising LoP

Opposition Congress councillors on Wednesday staged a walkout at a general meeting of the Mangaluru City Corporation (MCC), as Mayor Premanand Shetty deferred his decision on recognising A.C. Vinayraj as Leader of the Opposition (LoP).

Earlier, Chief Whip Sudhir Shetty Kannur submitted that the district congress president wrote to the MCC Commissioner, informing him about the selection of the LoP when the Mayor is the supreme authority of the Corporation.

The next day, Mr. Vinayaraj occupied the chamber on his own. This was in clear disregard to the established practice and law.

The Congress, with 14 members in the 60-member Council, did not qualify to be recognised as the Opposition party either, Mr. Shetty said.

Former Mayor and senior Congress Councillor Shashidhar Shetty said one should go by values rather than rules.

“I admit we have committed a mistake. Let’s not agitate over it and close the matter by recognising Mr. Vinayraj as the Leader of the Opposition,” he said.

Mr. Vinayraj said unnecessary allegations were being levelled against him. The Commissioner, the Mayor and the Council Secretary were informed about his selection as well as the date of taking charge. Everything was done as per law, he maintained.

However, the Mayor said the Commissioner has prepared a file over the letter from the district congress president and sent to him. “I have written certain observations on the file and also sought legal opinion. A suitable decision will be taken in due course. Let’s concentrate on regular business,” he said.

Mr. Premanand Shetty noted he considered the monthly general meetings as most important to deliver services to people in a transparent manner.

Congress councillors, however, were not satisfied by the Mayor’s view and insisted on an immediate decision.

Since it was the first meeting after Mr. Premanand Shetty took over as the Mayor, the LoP should be recognised before proceeding with the meeting, they said.

The Council witnessed noisy scenes for a while before the Congress councillors staged the walkout.