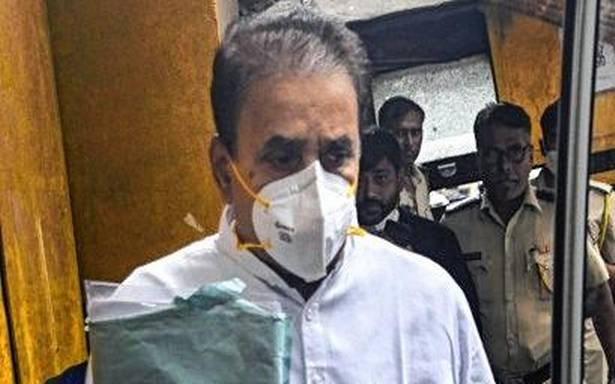 The court asked the CBI to probe the role of Mr. Deshmukh in the case of leak of documents

A confidential statement of CBI chief Subodh Kumar Jaiswal, recorded during his previous tenure in connection with bribery allegations against former Maharashtra Home Minister Anil Deshmukh, was recovered by the CBI from devices of an arrested agency official and a lawyer of the politician, officials said on Thursday.

Both the agency official and the lawyer have been charge-sheeted by the agency for allegedly subverting the case against the former minister.

According to the charge sheet, filed before a special court in New Delhi, the CBI recovered the statement, recorded by the investigation officer of the case against Mr. Deshmukh, from a pen drive seized from its sub-inspector Abhishek Tiwari and the phone of lawyer Anand Daga. Mr. Tiwari was part of the team probing Mr. Deshmukh.

The CBI has accused Mr. Tiwari of hatching a conspiracy with Mr. Daga and leaking sensitive and secret documents to subvert the investigation pertaining to the case that was handed over to the agency by the Bombay High Court to probe corruption allegations against Mr. Deshmukh.

The CBI had arrested Tiwari and Daga and both are now in judicial custody.

A forensic analysis of digital devices recovered from Mr. Tiwari and Mr. Daga revealed the statement of CBI Director Subodh Kumar Jaiswal, when he was Director General CISF, telephonically recorded by the investigating officer of Mr. Deshmukh case and CBI Deputy SP Mukesh Kumar on May 6, 2021.

Mr. Kumar had saved this statement on an external hard drive and no other members of the investigation team was aware of this fact, they said.

Mr. Jaiswal was questioned under Section 161 of the CrPC about allegations against Mr. Deshmukh during his tenure as the Maharashtra Director General of Police.

The forensic analysis showed that the document was found saved in a pen drive of Mr. Tiwari on August 1, 2021 and mobile phone of Mr. Daga on August 5, 2021.

Mr. Jaiswal, a 1985-batch IPS from Maharashtra, had assumed charge as Director, CBI on May 26, 2021 after handing over the charge of Director General, Central Industrial Security Force.

The CBI conducted a forensic analysis of the record extracted from the digital devices of both the accused which showed that both the documents were allegedly retrieved from the same source, having the same ‘hash value’ (a digital parameter to know if documents are copies of same source material), implying that Mr. Tiwari had handed over the content of Mr. Jaiswal’s statement to Mr. Daga, they said.

After the arrest of Mr. Daga, the CBI had conducted an imaging of his phone, from which files related to the Preliminary Enquiry and FIR against Mr. Deshmukh were recovered, they said.

The CBI on September 1 had arrested Mr. Daga and Mr. Tiwari for allegedly leaking confidential documents related to the preliminary enquiry against Mr. Deshmukh, they said.

A special court here has taken cognisance of the charge sheet noting that Mr. Deshmukh may be the controlling mind of the larger conspiracy, whereas the accused persons (Mr. Tiwari and Mr. Daga) may only be hands, as he (Mr. Deshmukh) would have been and was the main beneficiary from the leak of the contents of the PE and the case.

The court asked the CBI to probe the role of Mr. Deshmukh in the case of leak of documents.

The case pertains to a PE registered by the CBI against Mr. Deshmukh on the orders of the Bombay High Court which had issued the directions while hearing a public interest litigation on allegations of corruption against the former minister.

The PE findings showed the Deputy SP probing the matter had purportedly opined that no cognisable offence was made out against Mr. Deshmukh but it was later converted into an FIR based on a contrasting opinion of the Deputy SP.

The opinion mentioned in the FIR said that cognisable offence is made out against Mr. Deshmukh.

The findings giving clean chit to Mr. Deshmukh got leaked to the media causing an embarrassment to the CBI after opposition parties blamed the agency for conducting a motivated probe against the then Minister.

Soon after the leak, an embarrassed CBI booked Mr. Tiwari and Mr. Daga on the allegations of leaking documents.