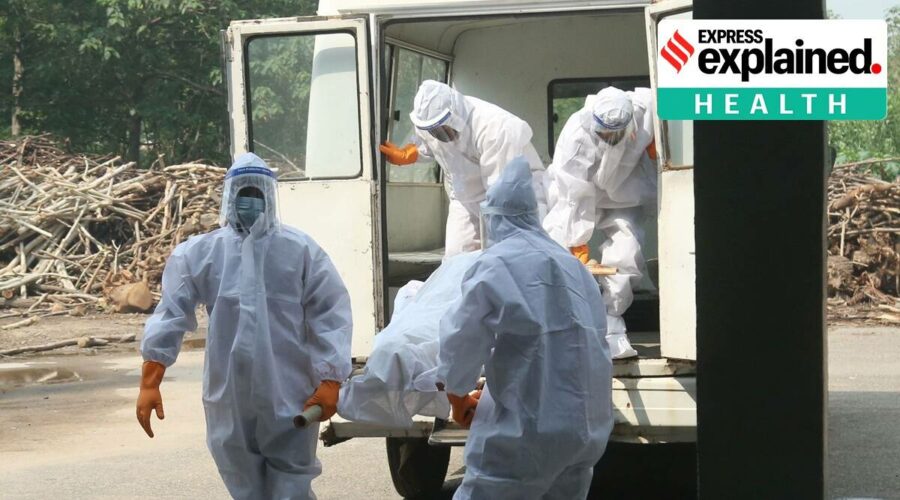 The Centre had submitted by affidavit on Saturday that state governments cannot afford to pay this, and had argued in favour of a broader approach including health interventions. On Monday, the Supreme Court reserved its verdict on a petition by two advocates seeking compensation of Rs 4 lakh to the kin of those who have died of Covid-19 or related complications. The Centre had submitted by affidavit on Saturday that state governments cannot afford to pay this, and had argued in favour of a broader approach including health interventions.

What are the provisions for compensation for death?

Last year, the Centre declared Covid-19 as a notified disaster under the Disaster Management Act.

The Centre revises this amount from time to time. On April 8, 2015, the Disaster Management Division of the Home Ministry wrote to all state governments and attached a revised list of “norms of assistance”. Under “ex gratia payment to families of deceased persons”, it specified: “Rs 4 lakh per deceased person including those involved in relief operations or associated in preparedness activities, subject to certification regarding cause of death from appropriate authority.”

So, what about compensation for Covid?

On March 14, 2020, the Home Ministry wrote to state governments that the central government “has decided to treat it (Covid-19) as a notified disaster for the purpose of providing assistance under SDRF”, and attached a “partially modified list of items and norms of assistance”. It did not specify payment of ex gratia to families of deceased.

If compensation were to be paid at Rs 4 lakh per deceased, the total expenditure would come to over Rs 15,572 crore for over 3.89 lakh Covid-related deaths until Tuesday.

Some states have decided to pay, but not for all deaths. The Delhi government recently announced Rs 5 lakh to the kin of persons who died due to shortage of oxygen, and Rs 50,000 to families of those who died of Covid.

How has the government responded to the petition?

It was filed in May by advocates Gaurav Kumar Bansal and Reepak Kansal. In its affidavit, the Centre submitted that ex gratia of Rs 4 lakh is beyond the affordability of state governments. argued that if Rs 4 lakh is paid to the kin of each, it “may possibly” consume the entire amount of the State Disaster Relief Fund (SDRF), leaving states with insufficient funds for organising a response to the pandemic, or to take care of other disasters.

“Already the finances of State Governments and the Central Government are under severe strain, due to the reduction in tax revenues and increase in health expenses on account of the pandemic,” it said. It said the term ex gratia itself means the amount is not based on legal entitlement.

It said a “broader approach, which involves health interventions, social protection, and economic recovery for the affected communities”, would be a “more prudent, responsible, and sustainable approach”.

What steps has the government taken?

On June 2, the Home Ministry responded to an RTI application by The Indian Express: “So far as Ministry of Home Affairs is concerned, there is no scheme to pay compensation to families of deceased due to corona virus (COVID-19).” It said the Centre has decided to treat it as a notified disaster for the purpose of providing assistance under the State Disaster Response Fund to all states for certain items: measures for quarantine for sample collection and screening; procurement of essential equipment/labs; and relief measures such as temporary accommodation, food, clothing, and medical care.

The National Disaster Management Authority (NDMA) has provided Rs 999.94 crore to various state governments to deal with issues arising out of migration of labour due to Covid-19. This comes from the amount NDMA received from the PM Cares Fund. As per an RTI response from the NDMA on June 18, only Himachal Pradesh and Mizoram have provided utilisation certificates about the amounts released to them.

In Lok Sabha on September 22, MP Manish Tewari asked whether the government had provided compensation to families of “those killed and injured on NHs (national highways) due to the Government‘s inability to provide them with the requisite transportation facilities”. Minister of State for Road Transport and Highways V K Singh responded: “In order to assist the movement of migrant labourers walking on foot on the various National Highways all across the Country, necessary assistance were provided in terms of food, drinking water, basic medicines, foot wears, etc”.

Last year, after 16 migrant workers died on railway tracks during the first wave of Covid-19, Prime Minister Narendra Modi had approved Rs 2 lakh to their kin.

06/23/2021 India Comments Off on Compensation for Covid deaths: petition in Supreme Court, and what the law says
India