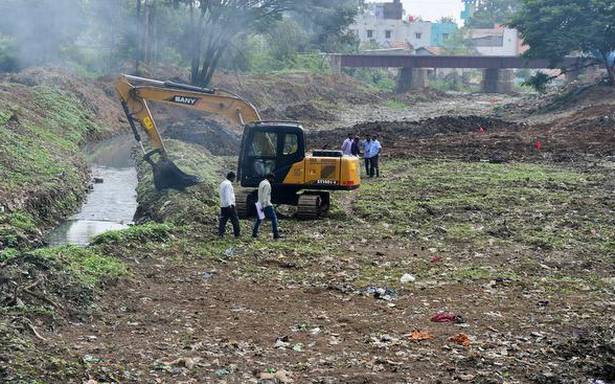 The civic body plans to execute the work in two phases

Coimbatore Corporation is expected to resume before Pongal the work to dredge and develop the Sanganoor Canal.

The Corporation Council had recently passed a resolution approving the appointment of a project management consultant to manage and supervise the ₹ 79.30-crore work, which involved development of the canal for the 3.30 km starting from Mettupalayam Road.

The Corporation had obtained administrative and technical sanctions from the Commissionerate of Municipal Administration in February last year.

The Corporation sources familiar with the Sanganoor Canal project said the civic body had planned to execute the work in two phases – Phase I for ₹ 49 crore and Phase II for ₹ 30.30 crore. And, both the phases covered only the 3.30 km stretch of the canal between the Mettupalayam Road and Sathyamangalam Road.

The sources said there was also an idea to lay concrete on the canal’s bed for the 3.30 km stretch, but the civic body was yet to take a call.

The work also involved removing encroachments on the canal banks. In the Corporation’s estimates there were more than 500 houses to be evicted. The Corporation was working in close coordination with the Tamil Nadu Urban Habitat Development Board, which had identified the families living there and readied alternative accommodation at its various projects.

The sources also said that the Corporation had started the work near Mettupalayam Road sometime ago but stopped because of monsoon. It hoped to complete the project within one-and-a-half years.