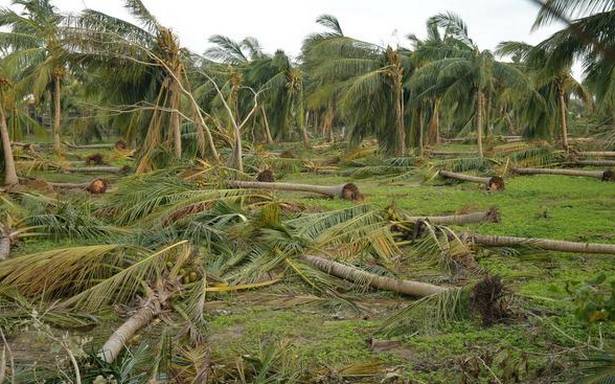 Farmers feel compensation is paltry and conditions to get it unacceptable

The insurance scheme for coconut trees remains unattractive for farmers owing to conditions laid down for claims.

Enquiries reveal that only a few farmers in Thanjavur district made enquiries with the Agricultural Department about the scheme after Cyclone Gaja. But the interest shown towards the scheme remained at the enquiry level as none of them applied for coconut insurance policy.

V.Veerasenan, president, Nasuvini Riverbed Dam Farmers Development Association, Ponnavaroyankottai near Pattukottai, reasoned that the compensation offered under the insurance scheme was paltry and the conditions laid down for availing it were unacceptable to farmers.

Fixing the compensation at two slabs of ₹900 and ₹1,750 per tree would in no way bring solace to the farmers, he said. “The insurance company prefers to entertain the compensation claim only if the entire grove gets affected or annihilated and tries to dismiss the claim proposal citing unacceptable reasons,” he said.

Further, an order issued in favour of a farmer by the Consumer Disputes Redressal Forum, Tiruvarur district, with respect to a dispute over the coconut trees insurance claim in the year 2018, just a few months before Cyclone Gaja, was yet to be honoured by the insurance company as it had gone on appeal, he said.