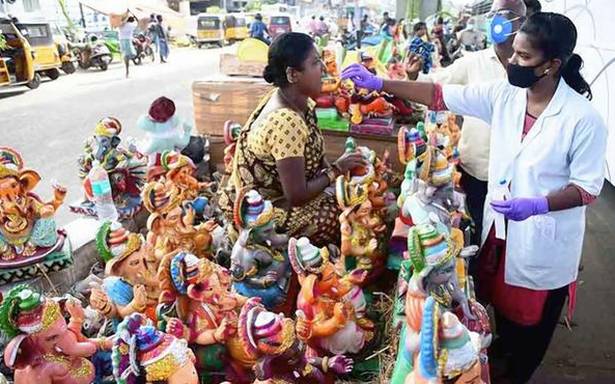 Existing restrictions to continue till September 15

Chief Minister M.K. Stalin on Thursday ordered the extension of the ban on political, social, cultural and religious gatherings at public places till October 31 to arrest the spread of COVID-19. Other restrictions that are in force will continue till 6 a.m. on September 15, he said in an official release.

“To control the spread of COVID-19 and to prevent a third wave of infections, I appeal to the people to celebrate festivals inside their homes and use public transport only if necessary. People are also requested to avoid frequenting crowded places and events,” he said.

The State government has taken note of a case of Nipah virus infection in neighbouring Kerala and is taking necessary steps to prevent its spread to Tamil Nadu, the Chief Minister said. “There has been an increase in the number of [COVID-19] cases in Kerala. Therefore, a ban has been imposed on buses operating between the two States,” Mr. Stalin said.

With a special committee of the National Institute of Disaster Management, operating under Ministry of Home Affairs, filing a report that there could be a third wave of COVID-19 infections in September and October, Tamil Nadu has imposed a ban on festivals, political, social and cultural events, as they could end up becoming ‘super-spreader’ events, Mr. Stalin said.

The release said certain restrictions had been relaxed with the livelihoods of the people kept in mind, while the relaxations that are already in place would continue.

He appealed to the people to follow COVID-19 preventive measures such as wearing face masks and frequently washing hands with soap.