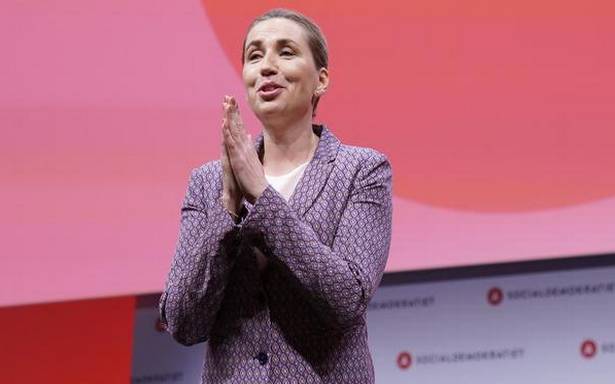 Climate change solutions will be at the top of the agenda for Denmark PM Mette Frederiksen, who will visit India this week — the first head of state or government to arrive in Delhi since February 2020 and the pandemic.

Ms. Frederiksen, who last held a summit with Prime Minister Narendra Modi in September 2020 where they had announced the first “Green Strategic partnership”, is expected to discuss investments in Indian renewable technology, supply of green technology and outline their climate positions on reducing carbon emissions ahead of the upcoming COP26 UN summit on Climate Change in Glasgow this November.

“The visit will give both sides an opportunity to discuss the entire gamut of bilateral relations and review the progress in the implementation of the ‘Green Strategic Partnership’,” said the Ministry of External Affairs statement on Tuesday.

Ms. Frederiksen, who will be given a ceremonial welcome at the Rashtrapati Bhavan on Saturday, will hold bilateral talks with PM Modi. She will also “interact with think tanks, students and members of civil society”, the MEA said.

Of particular interest will be the announcement of Danish financing and technological support for various projects including an “Energy island” off the coast of Tamil Nadu in the Gulf of Mannar where a proposal to produce 4-10 GW of wind power energy is being discussed. Last month, Danish Minister for Climate, Energy and Utilities Dan Jørgensen met Tamil Nadu Chief Minister M.K. Stalin to discuss investments of between $5-10 billion dollars in the project.

“PM Frederiksen’s visit will connect the dots between the way India is developing and how Denmark can help India to do so in a more sustainable way, according to its needs,” Danish Ambassador to India Freddy Svane told The Hindu, outlining the agenda areas of the Green Strategic Partnership including energy, water, climate financing and climate goals.

During the bilateral talks, the two leaders are expected to discuss regional issues including Afghanistan.

This is the first State visit by a Danish Prime Minister since ties were frozen in 2010 over India’s demand for the extradition of Danish national Kim Davy, wanted for the 1995 Purulia arms drop case, which Denmark has not acceded to yet.

In 2018, Prime Minister Modi attended the Nordic-India summit in Stockholm, where he broke the ice with then Danish PM Lars Lokke Rasmussen, and hosted him in 2019 at the Vibrant Gujarat summit when Denmark was a partner country. Officials said the invitation to Ms. Frederiksen this week indicates the Modi government’s decision to further “move on” from the Davy matter which held up ties until 2016, is being processed on a “separate track”.

Kim Davy, or Niels Hock, is wanted in India for his role in delivering a massive cache of arms including guns, grenades, rocket launchers, and ammunition from an AN-32 plane that he flew from Karachi to Kolkata, making the mysterious drop over Purulia in West Bengal, and had even written about the incident in a book. The Danish government, which had earlier promised to extradite him to face trial in India, reversed the decision after a court ruling based on a human rights plea by Mr. Davy’s lawyers.

“India must not forget or forgive Denmark’s conduct in the Kim Davy matter. It must hold them to account to ensure that a self-confessed criminal is brought to India to face justice,” said Vivek Katju, former diplomat who oversaw negotiations over the Davy case as the then Secretary (West), when asked about the upcoming visit.

Ms. Frederiksen, who was earlier scheduled to visit Delhi in April 2021, had to cancel her plans after the second wave of the pandemic hit India, amidst a number of other high-profile cancellations by leaders of Australia, Japan and the U.K.