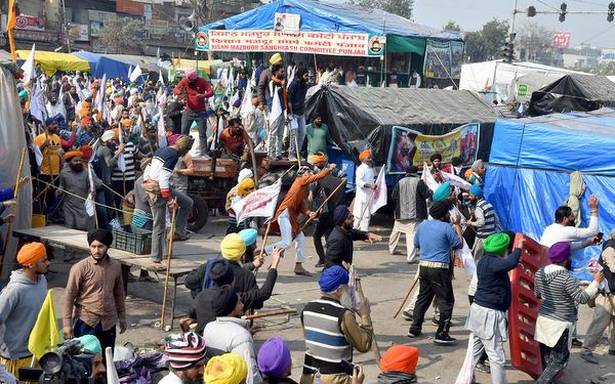 Police resort to tear gas, lathi charge after both sides pelted stones at each other

A clash broke out between a group of people, who claimed to be locals, and the protesting farmers at the Singhu border on Friday.

Earlier in the day, the group had carried out demonstrations near the barricades, which are placed a couple of km away from the main protest site, demanding the inter-State highway be cleared.

Next, despite the heavy presence of security, the group charged towards the main protest site and displaced tents.

This was followed by heavy stone pelting after which the farmers also retaliated. The Delhi Police fired tear gas and resorted to lathicharge to bring the situation under control.

Since morning, all entry points and roads leading to the main protest site at the Singhu border had been sealed by the Delhi Police with boulders and barricades in place.

Soon after violence erupted near the entrance of the protest site, which is a short distance away from the main stage, the protesting farmers stationed along the highway, gathered on the other side of the barricades.

However, several volunteers were later seen asking the farmers to retreat and announcements were also made from the stage, asking them to maintain calm.

A few minutes after the police fired the tear gas and lathicharged farmers, the group of locals, who had been pushed back slightly, resorted to stone pelting for a brief period.

A confrontation-like situation had arisen on Thursday as well after the group assembled at the Singhu border. They had argued that the farmers had allegedly disrespected the Tricolour at Red Fort on January 26. They also threatened to return to the site “in larger numbers.”