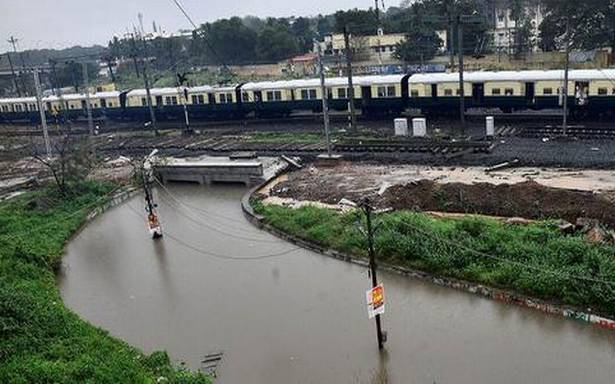 IMD attributed the downpour to an easterly trough

The sudden downpour on Tuesday left many roads inundated in Chennai and brought significant inflows into waterbodies. The city recorded the highest quantum of rainfall on a single day in January since 1915.

While the northeast monsoon extending to January is not uncommon in Chennai, what came as a surprise was the intensity of rain lashing the city and neighbouring districts since Monday night.

Officials of the India Meteorological Department attributed it to an easterly trough over north Tamil Nadu.

Nungambakkam and Meenambakkam recorded 6 cm and 5 cm of rainfall respectively for 24 hours ending 8.30 a.m. on Tuesday. However, by 6.30 p.m., the two stations had recorded 8 cm and 10 cm rain respectively. Many other places, such as Taramani, received 12 cm, West Tambaram 10 cm and Poonamallee 7 cm.

S. Balachandran, Deputy Director General of Meteorology, Chennai, said the slow-moving easterly trough, which is laden with moisture, could bring such heavy rain during January too.

Tuesday’s rain could surpass those records and could be second highest in the century,” Mr. Balachandran said.

However, rain over Chennai could begin to decrease from Wednesday and moderate showers may occur in some areas. Wet weather over the State may continue till January 12, he said.

The Meteorological Department has forecast that heavy rain may continue in one or two places in districts including the Nilgiris, Cuddalore, Nagapattinam, Mayiladuthurai and Villupuram on Wednesday and some parts of southern districts on January 9.

Many interior areas are likely to have light to moderate rain on Wednesday.

Senior meteorologist Y.E.A. Raj said there had been instances of good rain over Chennai in January associated with the spilling over of the northeast monsoon. “But we are getting a heavy rain spell after a long gap since 2004. Nungambakkkam recorded cumulative rain of 5 cm on January 27 and 28, 2004. In January 1995, the weather station received 17 cm between January 13 and January 18. The weather station in Meenambakkam saw such heavy rain previously during January in 2002 and 2008 with 8 cm of rain,” he added.